10 Entrepreneur Stats That You Need To Know in 2022 [INFOGRAPHIC] Thinking about making the leap into entrepreneurship?

It’s a thrilling new experience, one that’s extremely rewarding and sure to keep you on your toes at all times.

We’re not gonna lie: frustration is a natural part of entrepreneurship. But once you achieve success, you’ll realize it was all worth it.

Before you start, whether you want to just test the waters with a little side hustle or go full-on into it, it’d do you best to get a feel of entrepreneurship around the world.

That’s what we’re here to do today. We’ll cover issues like:

Why are the joys being an entrepreneur brings?
How many entrepreneurs are there in the world?

If you’re looking for entrepreneurship stats and facts about entrepreneurs, read on. In this article, we’ll cover ten entrepreneur statistics you need to know in 2022. Let’s get straight to them.

Don’t wait for someone else to do it. Hire yourself and start calling the shots.

1. How Many Entrepreneurs Are There in the World? 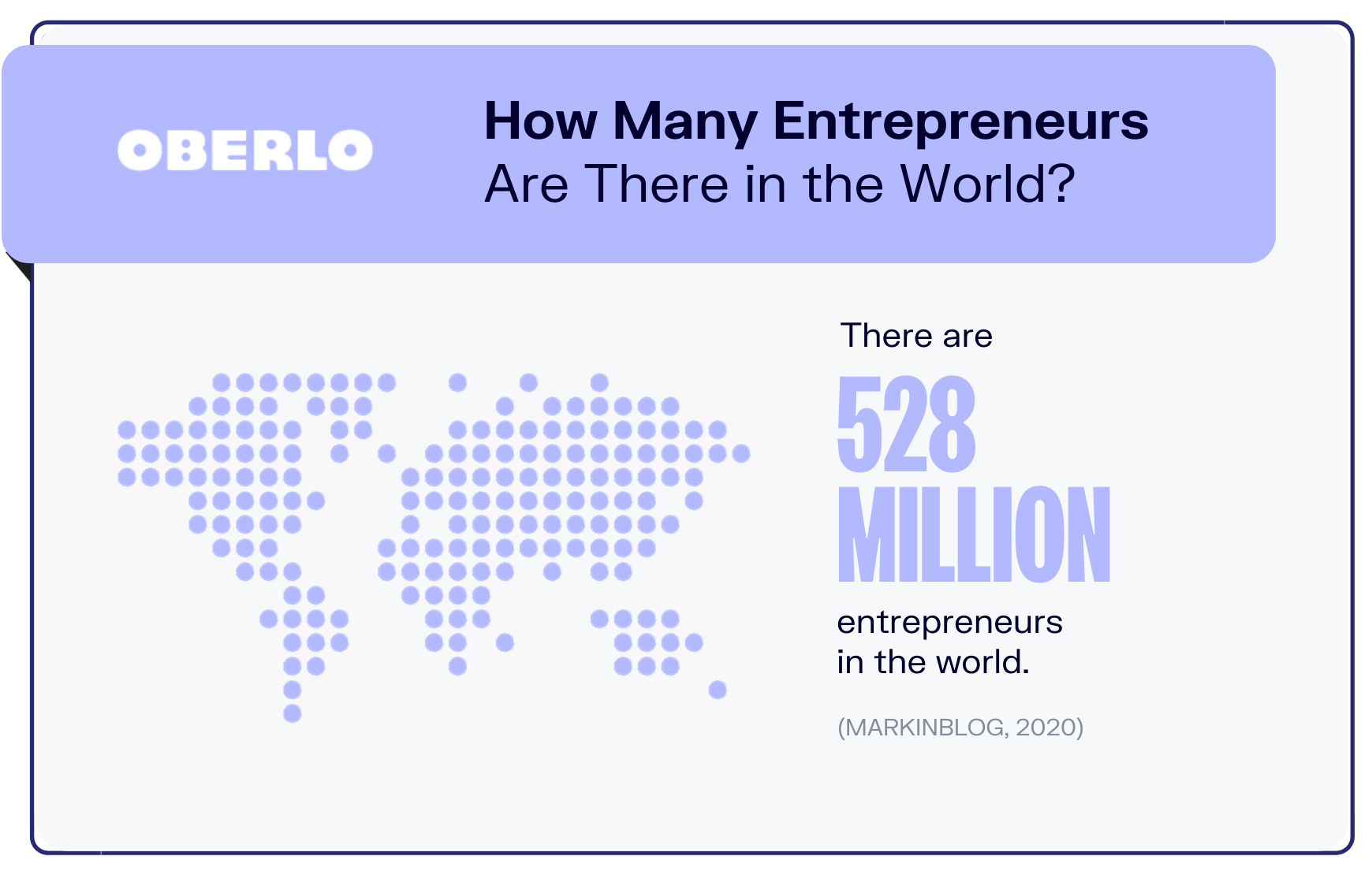 To kick things off, let’s first understand how popular being an entrepreneur is.

There are 582 million entrepreneurs in the world (MARKINBLOG, 2020). Though they are spread across the globe, there are a few places that entrepreneurs—both existing and aspiring ones—gravitate towards. This is mostly because of the good support and infrastructure that these places provide.

The World Bank’s Ease of Doing Business index ranks economies according to how conducive they are for new businesses.Of the 189 countries and territories analyzed in its 2019 report, New Zealand came out on top. This is followed by Singapore, Hong Kong, Denmark, and South Korea.

The United States is sixth on the list and ranks particularly high in terms of ease of resolving insolvency (second) and obtaining credit (fourth).

2. How Many New Entrepreneurs Are There in the US? 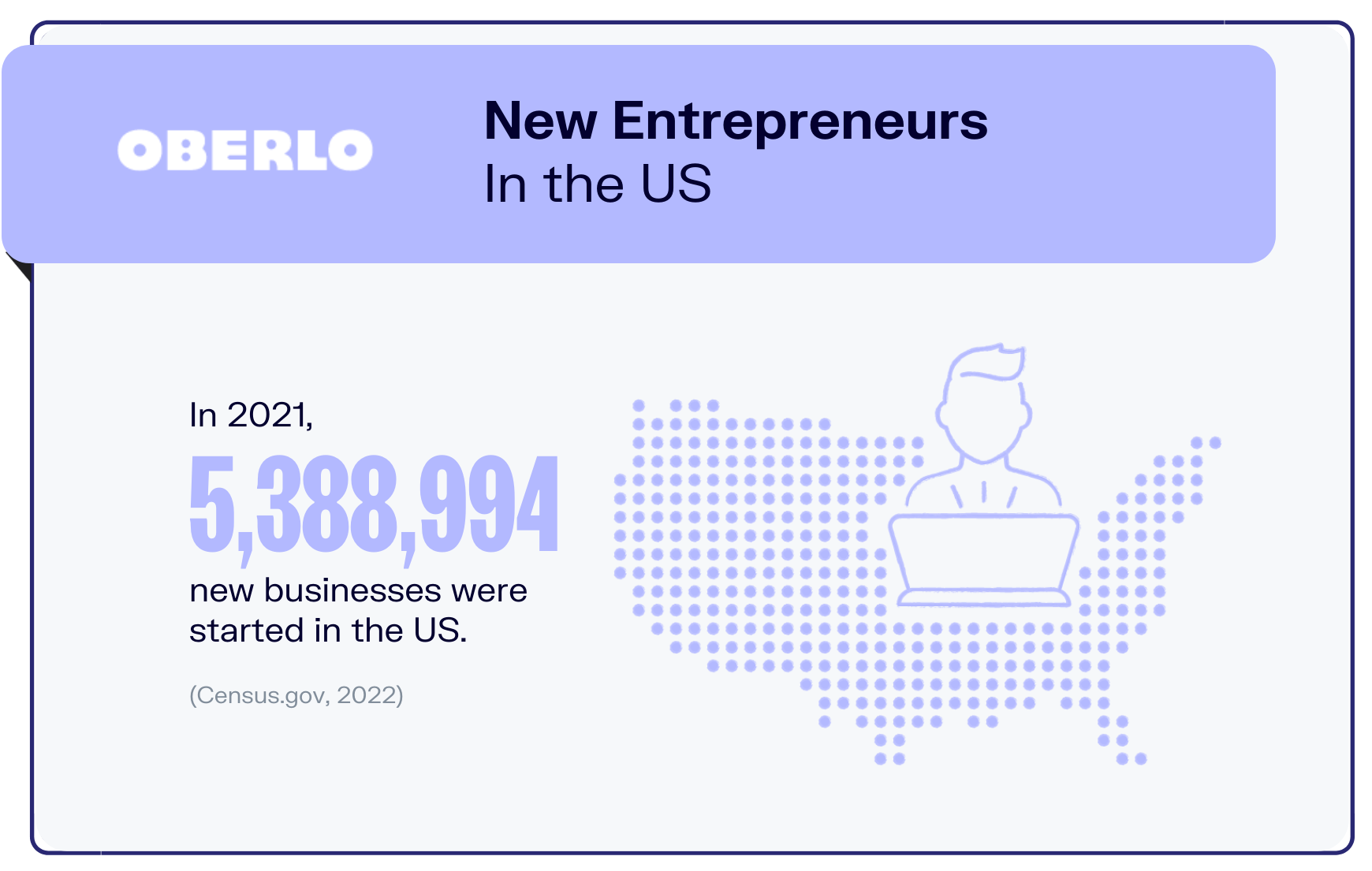 Given how easy it is to start a new business in the US, it should come as no surprise that there are millions of entrepreneurs launching new ventures there every single year.

According to the latest entrepreneurship stats, nearly 5.4 million new businesses were registered in 2021 (Census.gov, 2022). Not only is this a 23 percent year-over-year increase, but it is also the highest number of young establishments there’s ever been in a single calendar year in more than 15 years.

The number of new entrepreneurs in the US had been increasing annually since 2004. But during the global financial crisis, the number fell. In 2008, the number of new businesses registered decreased five percent compared to the previous year. It dropped another 3.7 percent in 2009, before recovering in 2010.

Since then, entrepreneurship has been on a steady increase, with more and more new businesses being launched every single year.

3. How Many Female Entrepreneurs Are There Worldwide? 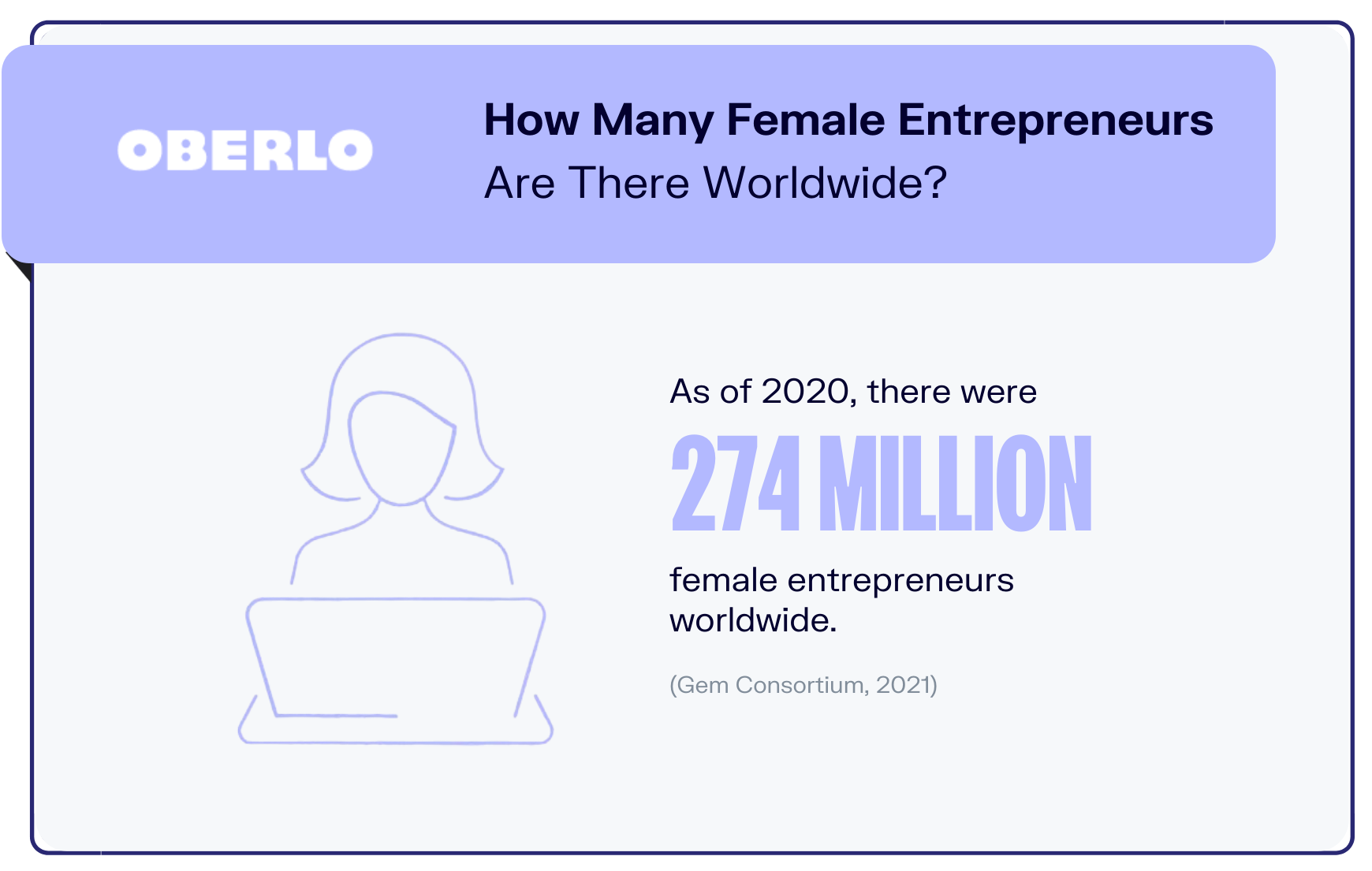 Now that we’ve established the total number of entrepreneurs in the world and in the US, let’s look at things from another angle—the number of female entrepreneurs worldwide.

As of 2020, there were approximately 274 million women worldwide engaged in entrepreneurial activities (GEM Consortium, 2021).

With 51.1 percent of the female adult population involved in entrepreneurial activity, Angola has the highest female entrepreneurship rate in the world. This is followed by Panama with 29.1 percent and then Saudi Arabia with 17.7 percent.

Of the 274 million female entrepreneurs worldwide, the majority of them cited a lack of jobs as their main reason to start a business. This is especially true for women located in Latin America, the Caribbean, Europe, North America, the Middle East, and Africa. In Central and East Asia, however, most female entrepreneurs said they decided to start a business to grow their wealth.

4. What Percentage of Entrepreneurs Are Turning a Profit? 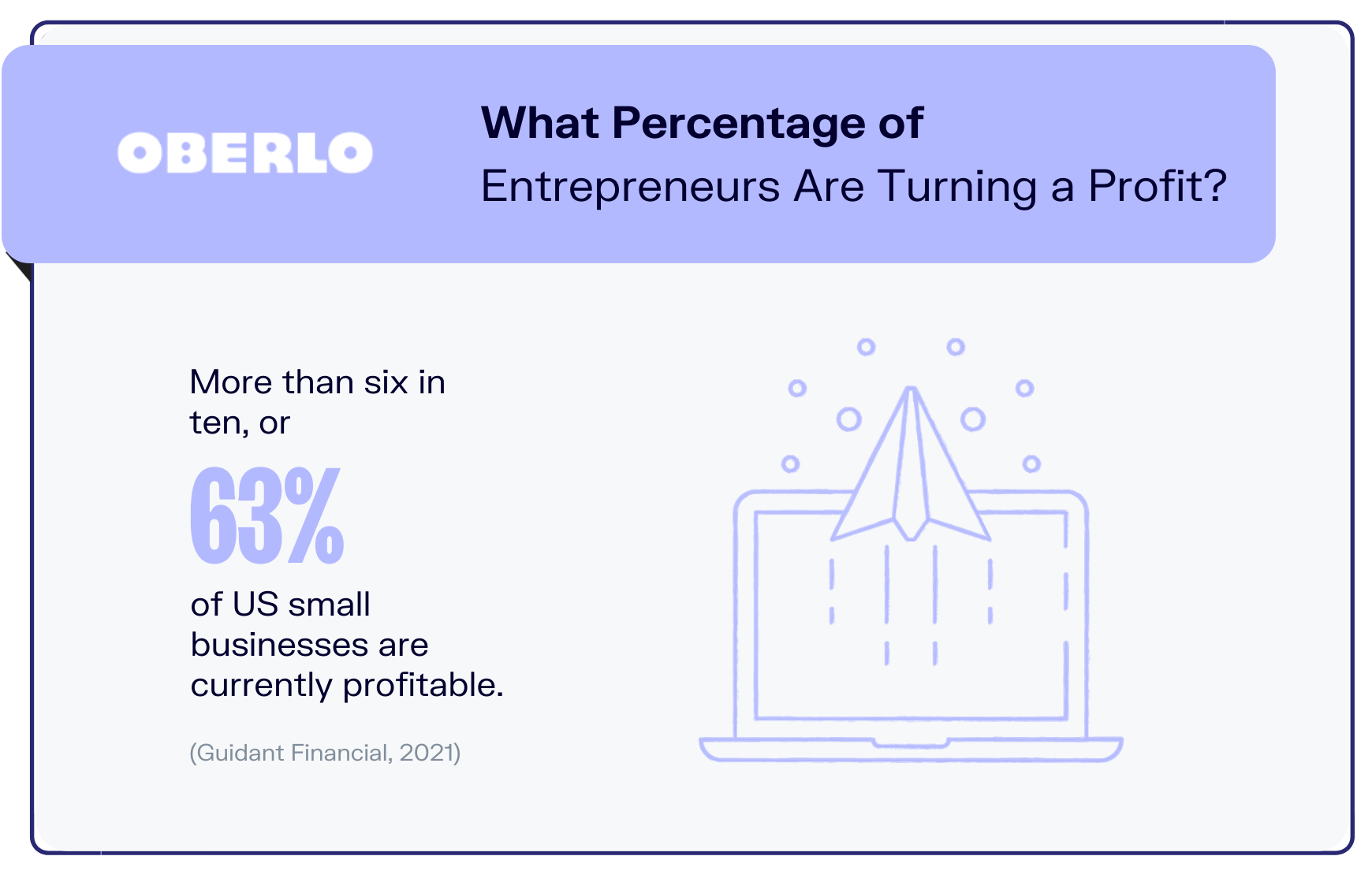 Being an entrepreneur and setting up a business is one thing. Sustaining it and making sure your numbers don’t fall in the red, however, is another.

The latest entrepreneurial statistics show that more than six in ten (78 percent) small businesses in 2020 reported to be profitable (Guidant Financial, 2021). This is actually a 15 percentage point drop from the previous year, which experts attribute to the impact of the coronavirus pandemic.

In spite of this, sentiments remained relatively high. As many as 78 percent of small business owners expect to survive through the pandemic, and just four percent think their business will fail.

The sector your entrepreneurial venture is in can also affect your gains. Recent figures show that the industry with the highest net profit margin is accounting, with a margin of 18.4 percent (of total revenue). This is followed by lessors of real estate at 17.9 percent and legal services at 17.4 percent. 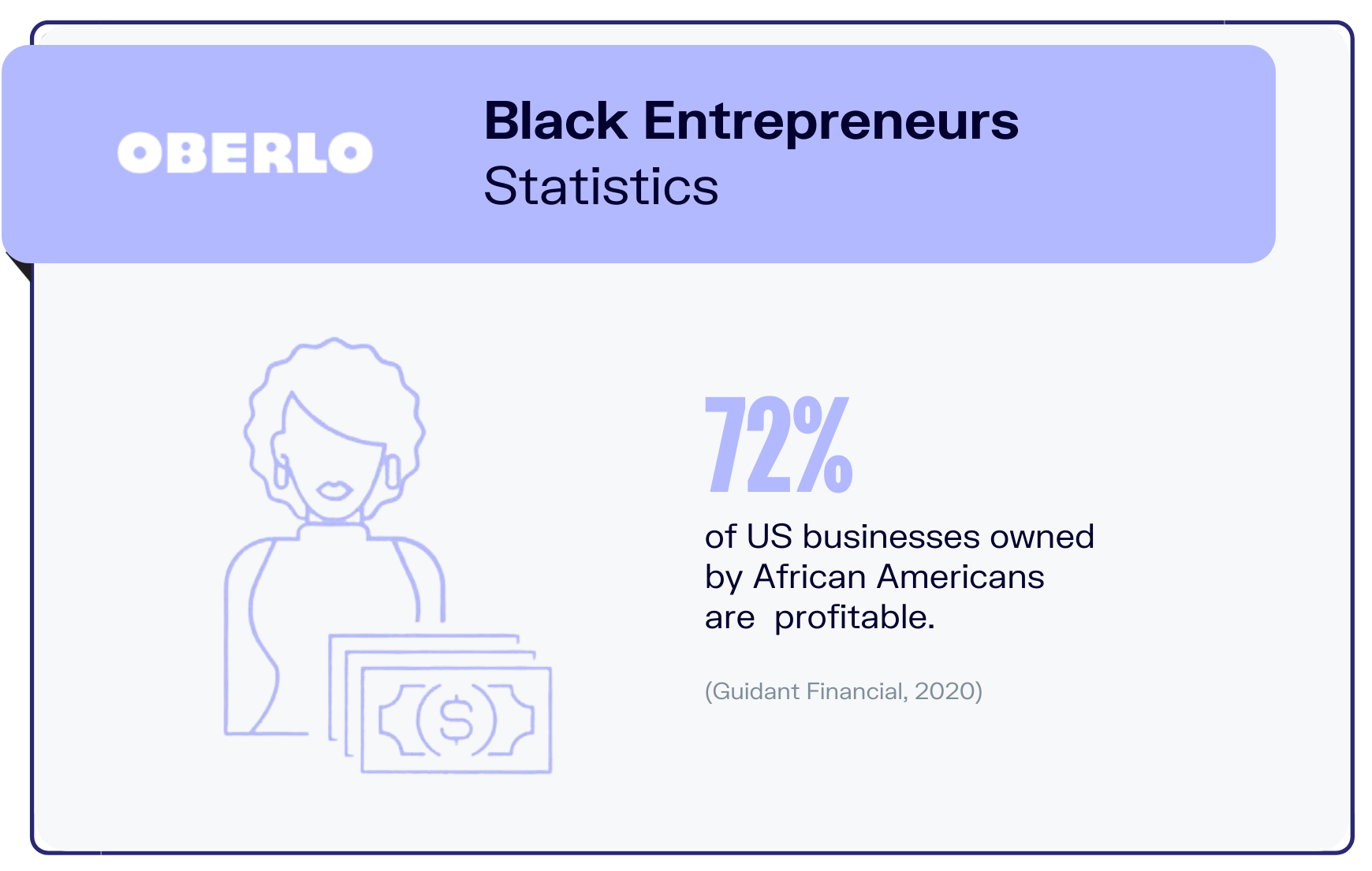 According to Guidant Financial, a US firm that finances small businesses, the majority of black entrepreneurs there (20 percent) provide business services. This is followed by health, beauty, and fitness services, food and restaurant, retail, and construction and contracting services.

Cash flow, one of the most common problems in business, is the top challenge African American entrepreneurs are currently facing. Marketing and advertising and inadequate time management are also some of their main concerns.

With regards to their financial health, the proportion of businesses owned by African Americans that are profitable is slightly lower than the national figure—72 percent instead of 78 percent (Guidant Financial, 2020). 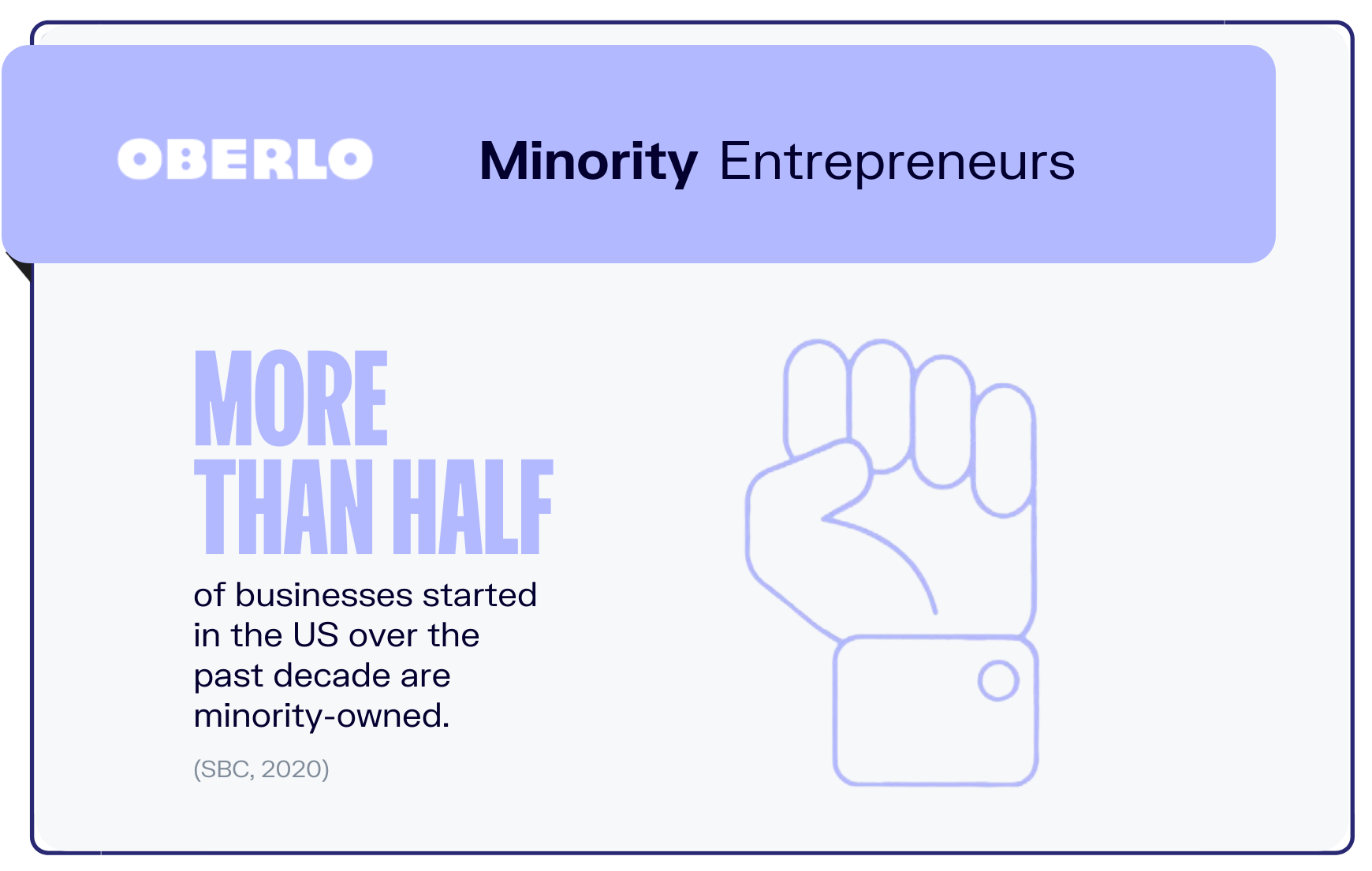 Entrepreneurship has become increasingly popular in the US over the past few years. But how many of these businesses, both new and existing, are minority-owned?

The latest entrepreneurial statistics show that in the past decade, as many as two million new businesses were launched in the United States. Of them, minority-owned companies make up more than half (SBC, 2020).

Overall, figures show that there are up to four million firms in the US that are owned by minorities and they generate a whopping $700 billion in sales every year.

Having increased by 35 percent over the past ten years, the number of minority entrepreneurs is clearly on the rise. But as of now, there still exists a disparity. Nearly one-third (32 percent) of the US population is a minority, while the percentage of minority-owned businesses stands at a much lower figure: 18 percent. 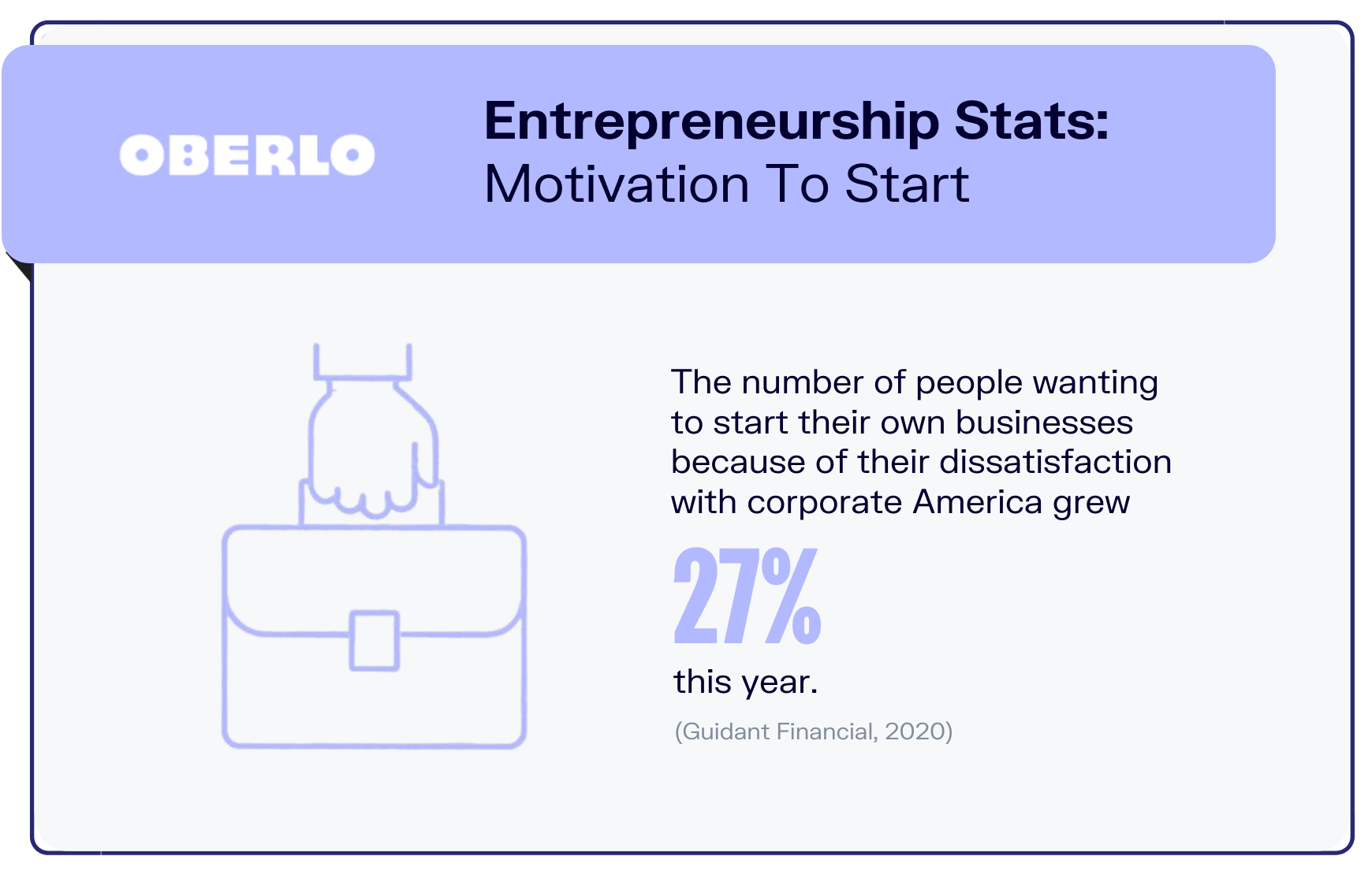 So what’s so great about being an entrepreneur? What are some factors that propel business owners to embark on such a venture?

As it turns out, being the boss of yourself and not having to be accountable to anyone are the main drivers of entrepreneurship in the US.

More than half (55 percent) of US small-business owners cite this as their main reason to start a business. This is followed by 39 percent who say they want to pursue their own passion.

The third most popular motivation to start a business is a “dissatisfaction with corporate America.” In fact, 25 percent of the current US entrepreneurs say they were driven to entrepreneurship because of this.

It’s interesting to note that this sentiment has become more widespread this year. From 2019 to 2020, there was a 27 percent increase in people who have started their own business as a result of this discontent (Guidant Financial, 2020).

8. Percentage of Entrepreneurs in America 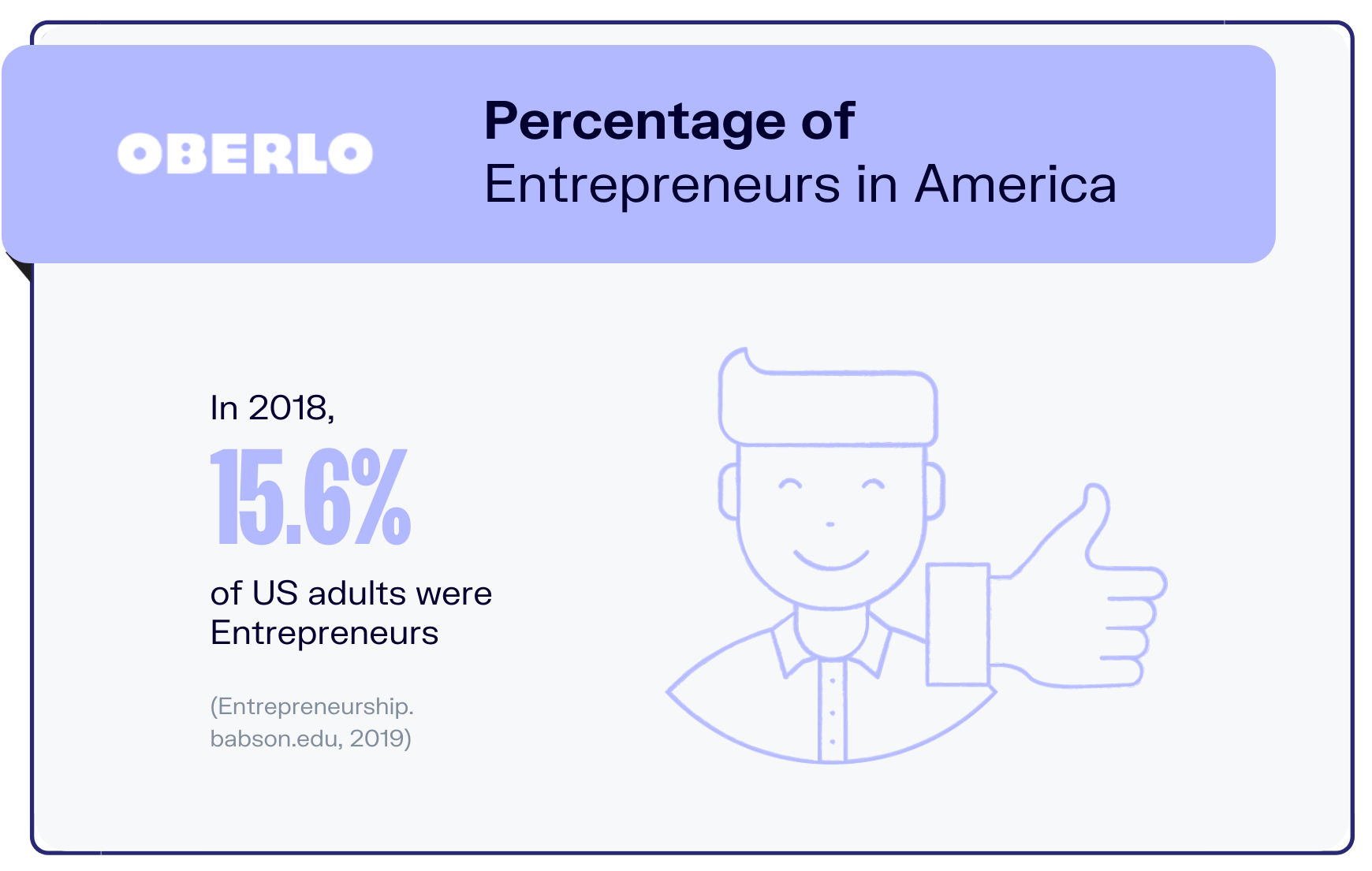 The advantages of entrepreneurship are clear. You get to be your own boss and you can choose when you want to work.

So, how many people in the US are choosing to be entrepreneurs over being an employee? Recent entrepreneur stats show that, in 2018, 15.6 percent of the US adult population (aged from 18 to 64) were entrepreneurs (Entrepreneurship.babson.edu, 2019). This was an all-time high and approximately 15 percent more than the previous year’s figures.

This peak also happened to coincide with a period of falling unemployment rates in the US. According to analyses, of the adult entrepreneurs, eight percent started a business “out of necessity.” The others did so out of interest and passion.

The proportion of entrepreneurs varies across different racial groups. More than one in four (26.4 percent) of adult entrepreneurs identify as Black/African American, while nearly half of that (13.5 percent) identify as White/Caucasian.

9. How Many Millionaires Are Self-Made? 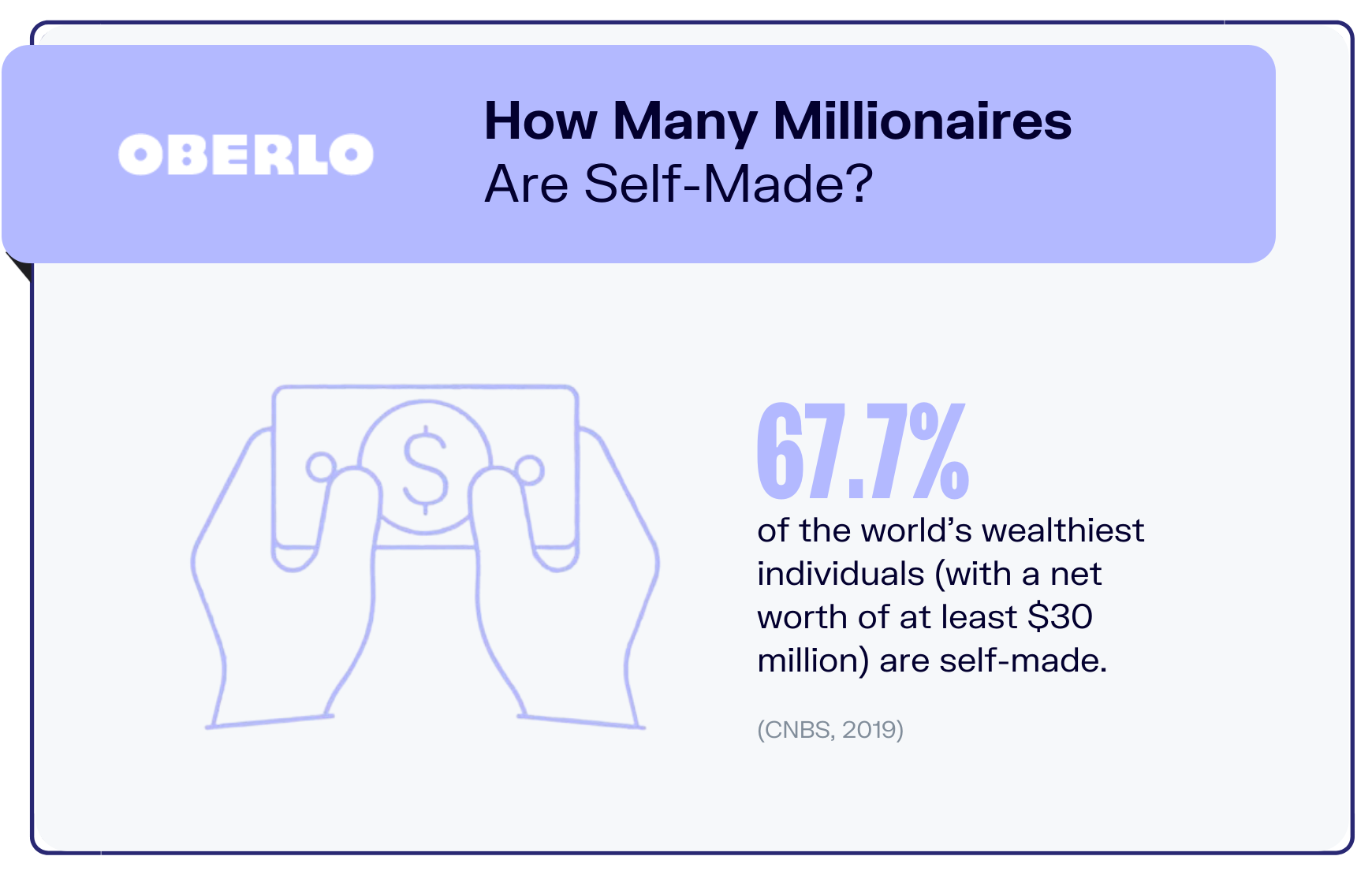 Will being an entrepreneur set you on a path to earning millions?

While that’s never a guarantee, here’s an entrepreneurship stat that may interest you if that’s something you’re going for: the majority of the world’s richest people are “self-made” (CNBC, 2019).

According to an analysis of wealthy individuals worth at least $30 million, of which there were 265,490 in the world in 2018, 67.7 percent of them accrued their wealth on their own. A quarter (23.7 percent) of them depended on themselves and their inheritance, and just 8.5 percent of them inherited all their wealth.

The percentage of these self-made millionaires has also been increasing year after year. In 2016, they made up 66.4 percent of all high net worth individuals. A year later, the number rose to 67.4 percent before further inching to 67.7 percent. 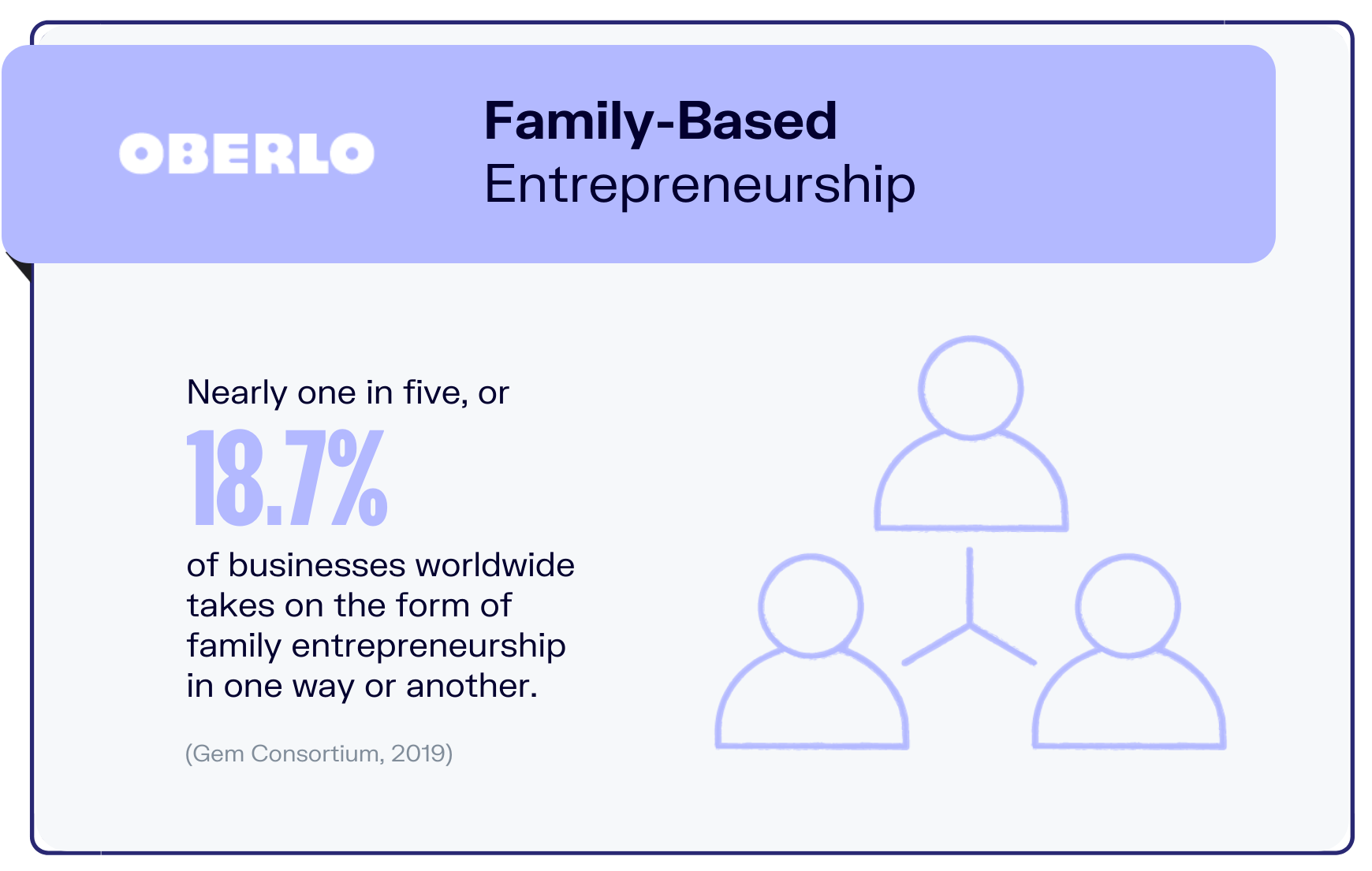 There are certainly advantages to starting a business with a partner.

After all, two heads are better than one. Plus, who better to embark on an entrepreneurial journey with than family?

According to the latest entrepreneurial statistics, nearly one in five (18.7 percent) business owners around the world are in it together with a family member (GEM Consortium, 2019).

Such an arrangement is particularly popular in countries like Colombia, the United Arab Emirates, and Uruguay, where family-based entrepreneurship makes up more than one-third of all the businesses there.

Experts say that in these regions, particularly Latin America, family plays a vital role in kick-starting the venture. However, there may be cases where some of these businesses fail to progress with their original founding members. Conversely, some family members may not be involved in the starting stage and only come on board after.

There you have it—the top ten entrepreneur statistics you need to know in 2022.

Was there any stat that you found particularly surprising? And what did you make of these entrepreneurial statistics?

Whether you’re looking to become an entrepreneur in the US or anywhere else in the world, these facts about entrepreneurs should have given you a better idea of the exciting new world you’ll soon be joining.

Here’s a summary of the Entrepreneur statistics you need to know in 2022:

There are 582 million entrepreneurs in the world (MARKINBLOG, 2020).
Nearly 5.4 million new businesses were started in the US in 2021 (Census, 2022).
As of 2020, there were 274 million female entrepreneurs worldwide (GEM Consortium, 2021).
More than six in ten (63 percent) of US small businesses were profitable in 2020 (Guidant Financial, 2021).
72 percent of US businesses owned by African Americans are profitable (Guidant Financial, 2020).
More than half of the new businesses started in the US over the past decade are minority-owned (SBC, 2020).
The number of people wanting to start their own business because of their dissatisfaction with corporate America grew 27 percent this year (Guidant Financial, 2020).
In 2018, 15.6 percent of all US adults were entrepreneurs (Entrepreneurship.babson.edu, 2019).
67.7 percent of the world’s wealthiest individuals (with a net worth of at least $30 million) are self-made (CNBC, 2019).
Nearly one in five (18.7 percent) of businesses worldwide takes on the form of family entrepreneurship in one way or another (GEM Consortium, 2019).

Is there anything else you’d like to know about Entrepreneur statistics and wish was included in this article? Let us know in the comments below!

How Affiliates Can Work with Google to Reduce Link Spam (in 5 Steps!)

10 Mobile Usage Statistics You Should Know in 2023 [Infographic]