10 Virtual Reality Statistics You Should Know in 2022 [Infographic] Despite it being a relatively nascent technology, the adoption of virtual reality across companies, organizations, and even governments worldwide has been widespread as its potential becomes clearer with every new development.

But what is virtual reality, what benefits does it offer, and what sectors are driving its growth? If you’re looking for answers to these questions and more, you’ve come to the right place.

In this article, you’ll learn ten virtual reality statistics you need to know in 2022. From growth figures to virtual reality future predictions on the global economy, we’ve got you covered.

Don’t wait for someone else to do it. Hire yourself and start calling the shots.

Before we jump into the statistics, let’s very quickly cover what virtual reality is.

Virtual reality is pretty much as its name suggests. It is a digitally created, three-dimensional environment generated using advanced computer technology. It places users in a simulation and allows them to immerse themselves in a different world.

This is done with the use of special devices such as headsets, goggles, gloves, and more, which allows users to explore and interact with these virtual worlds and their elements.

Now let’s jump into how popular VR has become and some of the driving factors behind its growth. 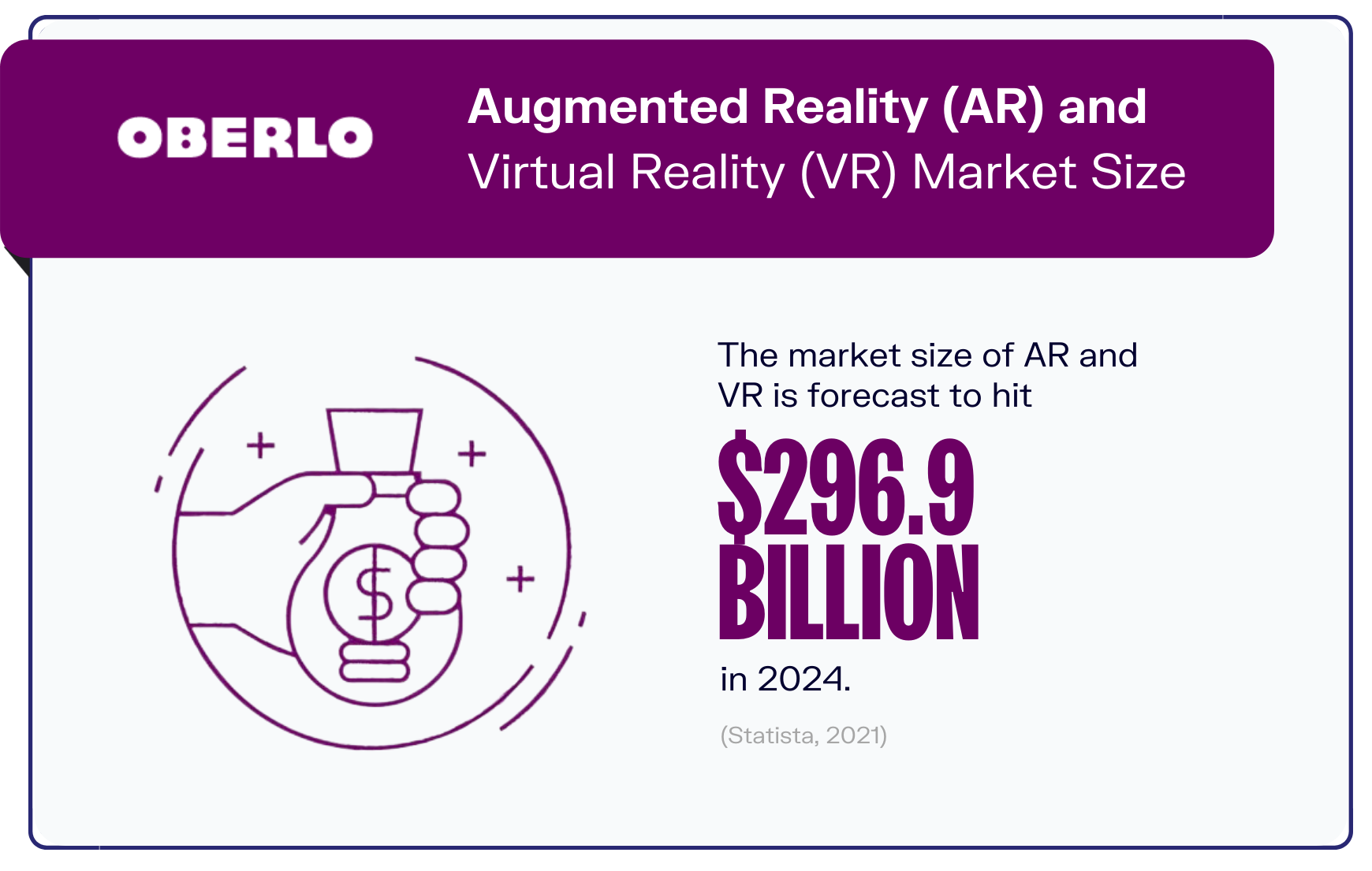 To kick things off, let’s take a look at the sector’s market size.

The latest virtual reality statistics show that the global market size of AR and VR is forecast to hit $296.9 billion in 2024 (Statista, 2021). This is nearly ten times the $30.7 billion market size registered as recently as 2021.

As it is, the forecast for 2022 is already a whopping 91.2 percent year-over-year increase. This is set to more than double to $124.4 billion in 2023, before skyrocketing in 2024. The growing market size only goes to show just how popular the technology is expected to become over the next few years.

Even though AR and VR devices still aren’t quite as in-demand as other electronics like smartphones or smartwatches, the growing market size is a clear indication of its potential. Many tech companies such as Microsoft, Intel, and Sony have invested large amounts of money into developing and advancing VR.

As we’ll see in the next statistic, this growing popularity of VR is likely to continue at least for another few more years. 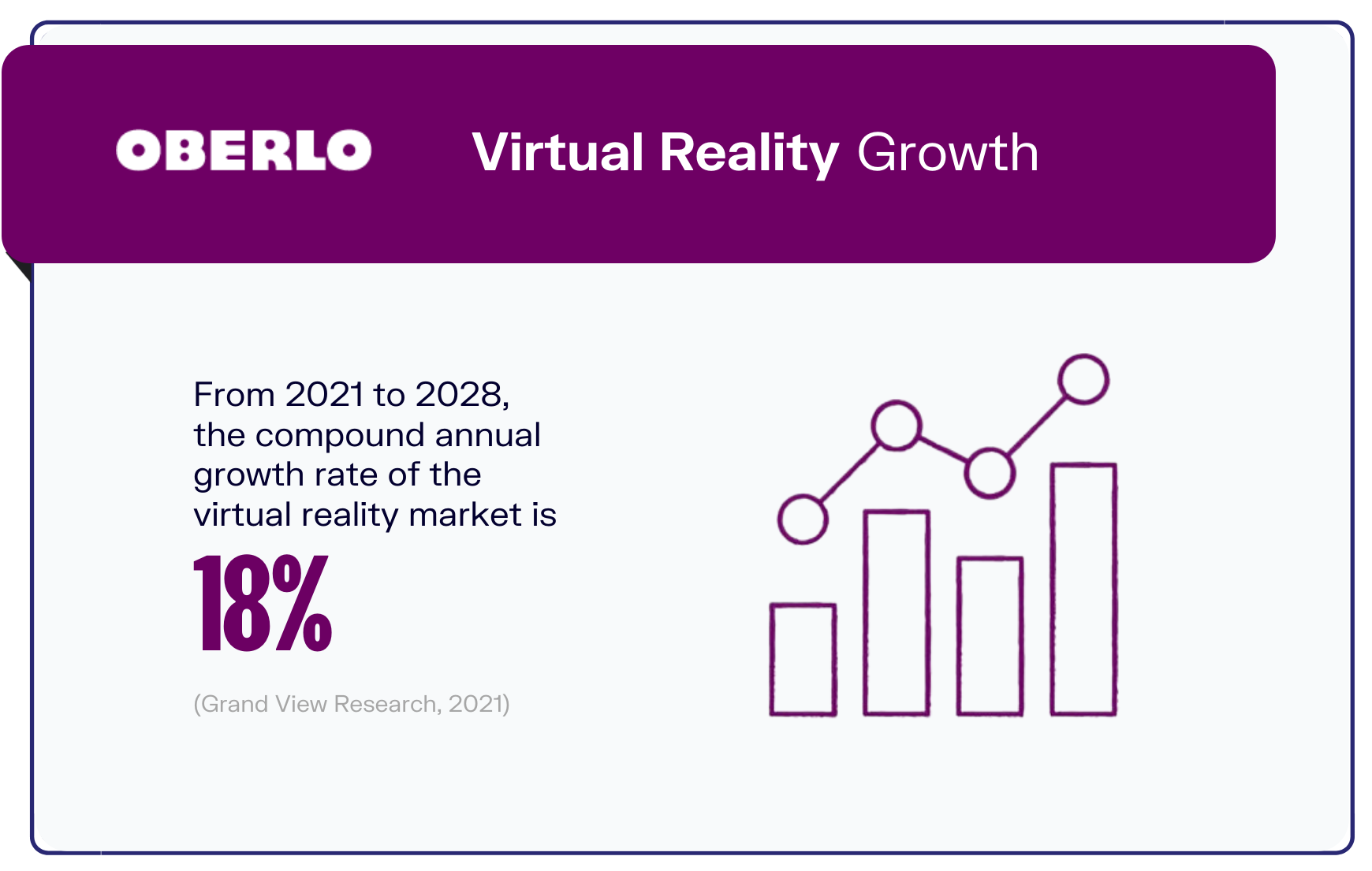 Going forward, all signs point to a surge in the virtual reality market.

Between 2021 and 2028, the compound annual growth rate of the market is expected to come in at 18 percent (Grand View Research, 2021). In other words, in this seven-year period, the VR sector is expected to grow at an average of 18 percent every year.

Analysts say that the oil and gas and manufacturing industries are expected to be the primary driving forces of this growth. In particular, the use of VR in training workers like mechanics, pilots, and technicians is set to increase.

The incorporation of VR for commerce has been particularly popular among businesses and organizations.

One example of this includes UK company ASOS adopting the technology in an effort to boost fashion sales amid the coronavirus pandemic. Using VR, the ecommerce company digitally fitted models with their new designs. This way, not only could their models comply with social distancing regulations and not have to go to the studio to try on these products, but ASOS could also successfully and creatively market their products to their customers in lockdown. 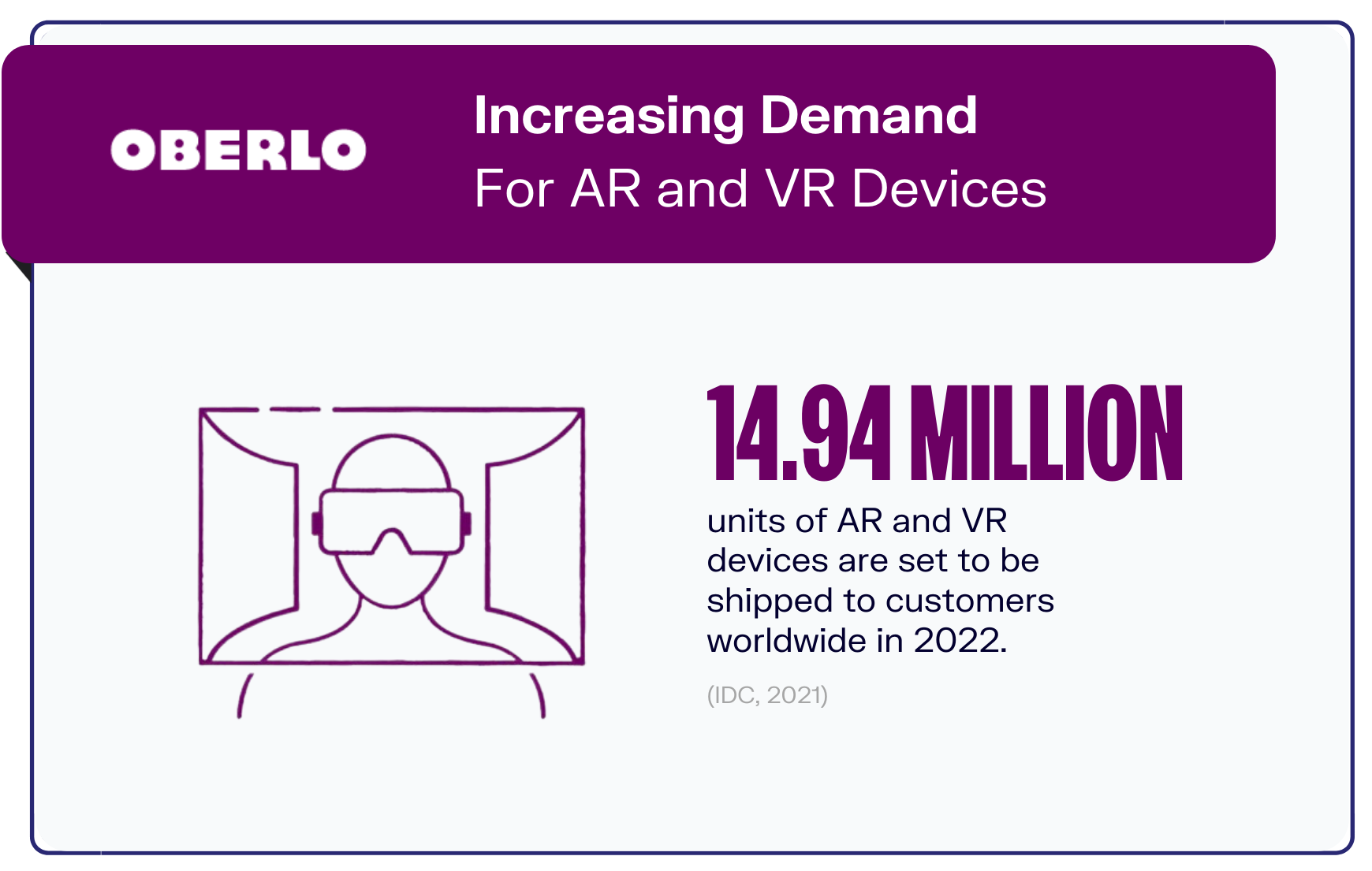 Given the potential and benefits of virtual reality technology, it should come as no surprise that the demand for AR and VR headsets is set to gain further traction in the near future.

Analysts credit the AR and VR boom to the coronavirus pandemic, which sent the world into lockdown and forced offices to close and employees to work from home. As contact is cut off from the rest of the world, many companies and employees started to adopt AR and VR technology to remote work and attend events. 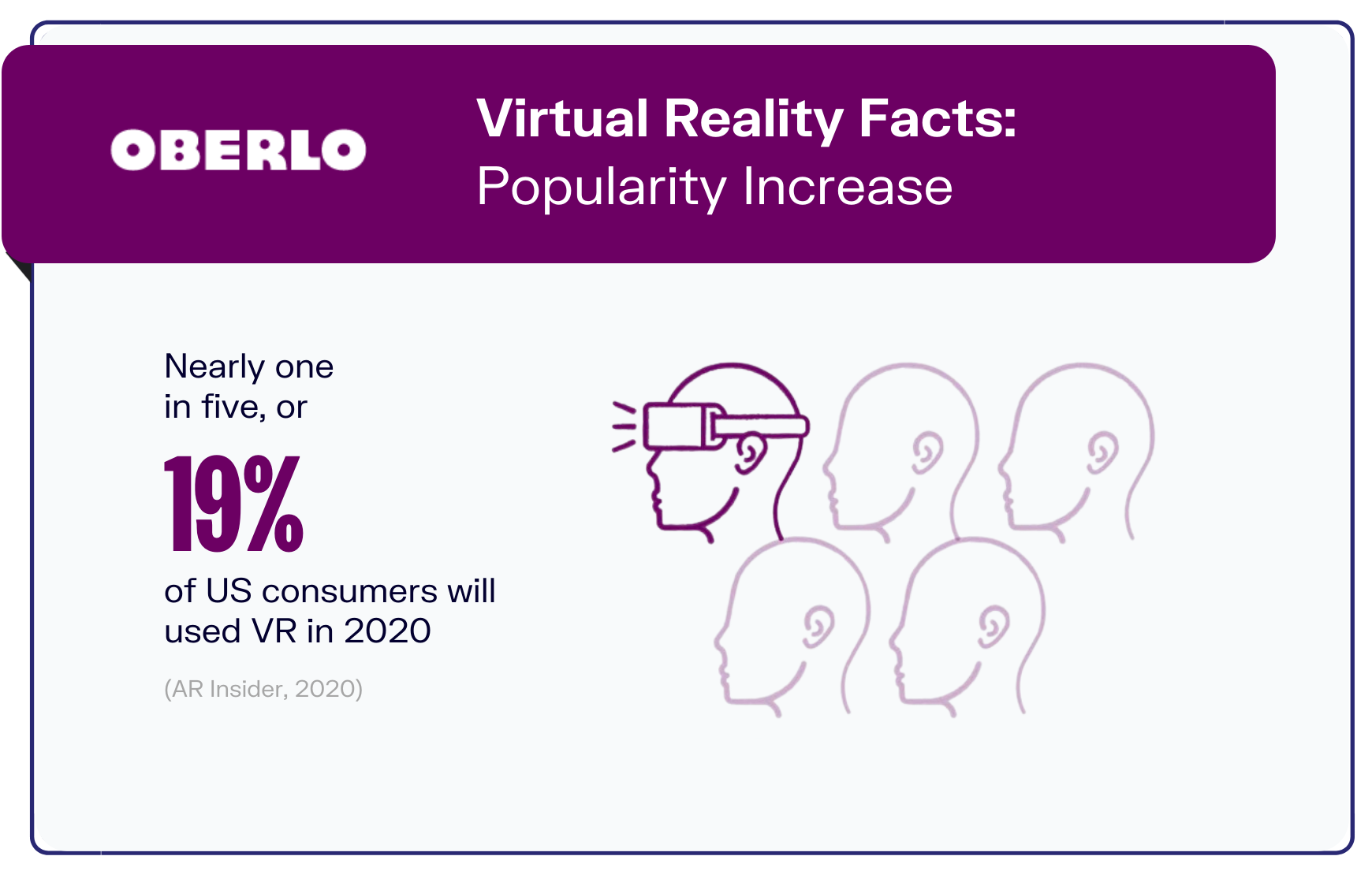 The US market is no exception to this virtual reality growth sweeping across the globe.

Nearly one in five (19 percent) of US consumers have used VR in 2020—a three percentage point increase from 16 percent in 2019 (AR Insider, 2020). Most users are also happy with the experience, with 55 percent of them saying they’re either extremely or moderately satisfied.

Since content encourages repeat use, which is one of the biggest factors of success, this is good news for the VR market.

Not all is fine and dandy, however. The barrier to VR use is still particularly troublesome to overcome. Consumers who do not use the tech say they’re simply not interested in giving it a try or discovering it, which will prove to be a challenge for VR developers.

5. Virtual Reality Usage in the US 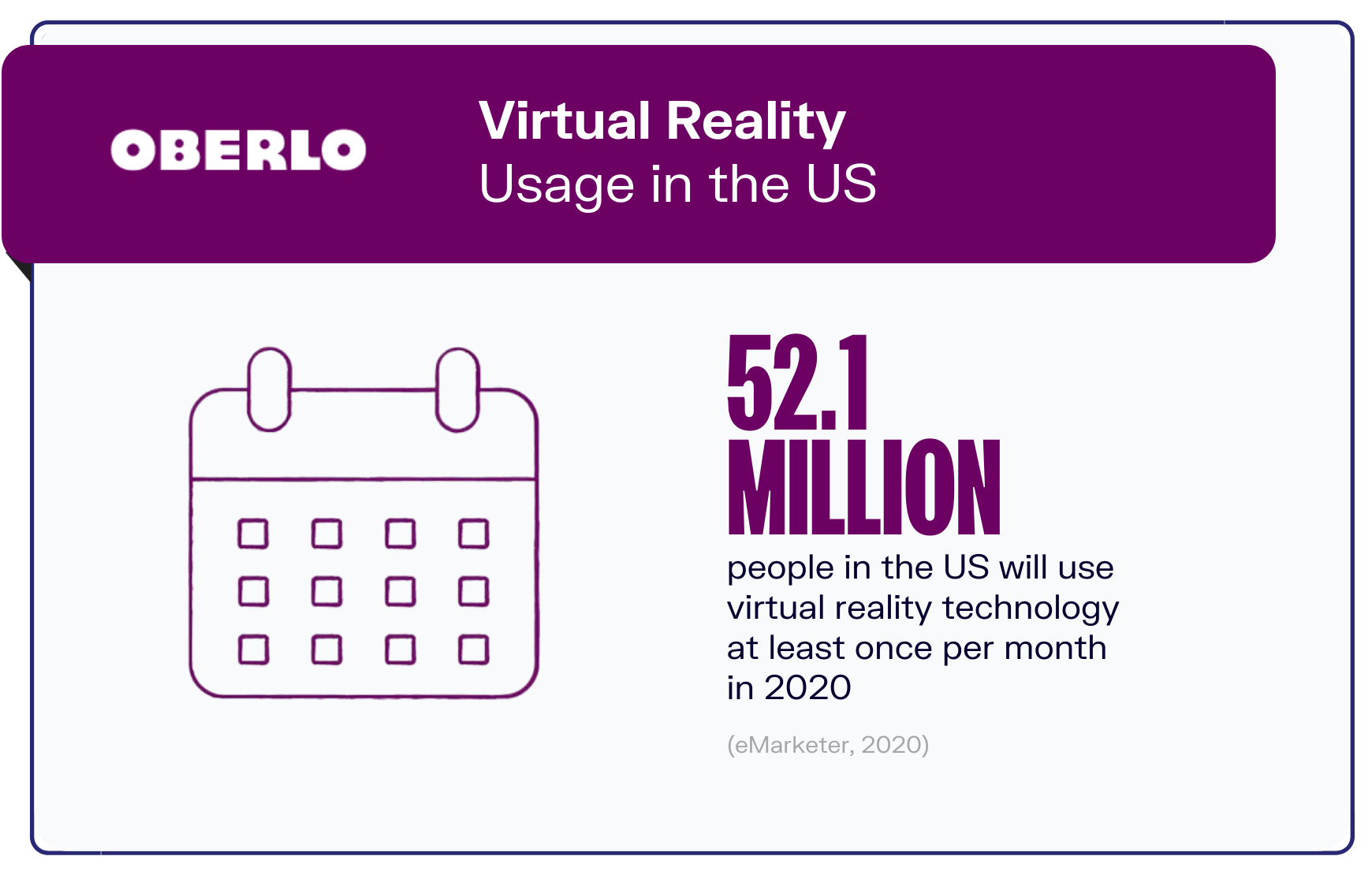 As more and more people in the US purchase VR sets, usage can be expected to increase along with it.

The latest virtual reality statistics show that 52.1 million people in the US will use the technology at least once per month in 2020 (eMarketer, 2020).

This marks a 20.9 percent increase from 2019’s 43.1 million. More and more US residents are also expected to start using VR more frequently. 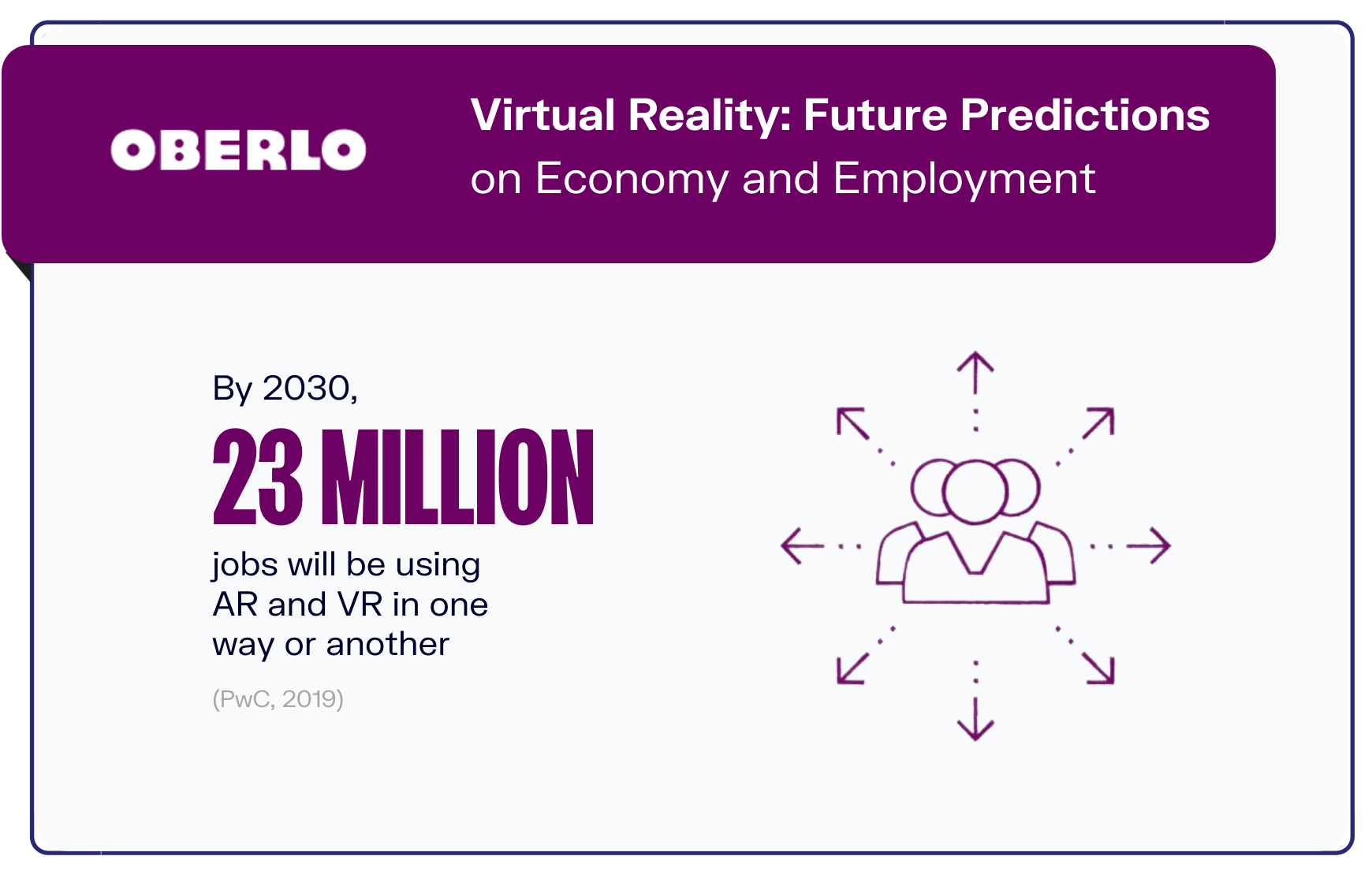 A recent analysis by leading consulting services firm PricewaterhouseCoopers purports that the tech is capable of injecting approximately $1.83 billion into the world economy by the end of this decade.

The report also predicts that VR will lead to a growing number of employment opportunities.

Right now, there are fewer than half a million jobs worldwide that are impacted by VR and/or AR. This will all change this decade, with as many as 23 million jobs set to be using AR and VR in one way or another for training, meetings, and customer service purposes by 2030 (PwC, 2019).

Larger economies, including the US, UK, Germany, and China, are expected to be the most impacted. 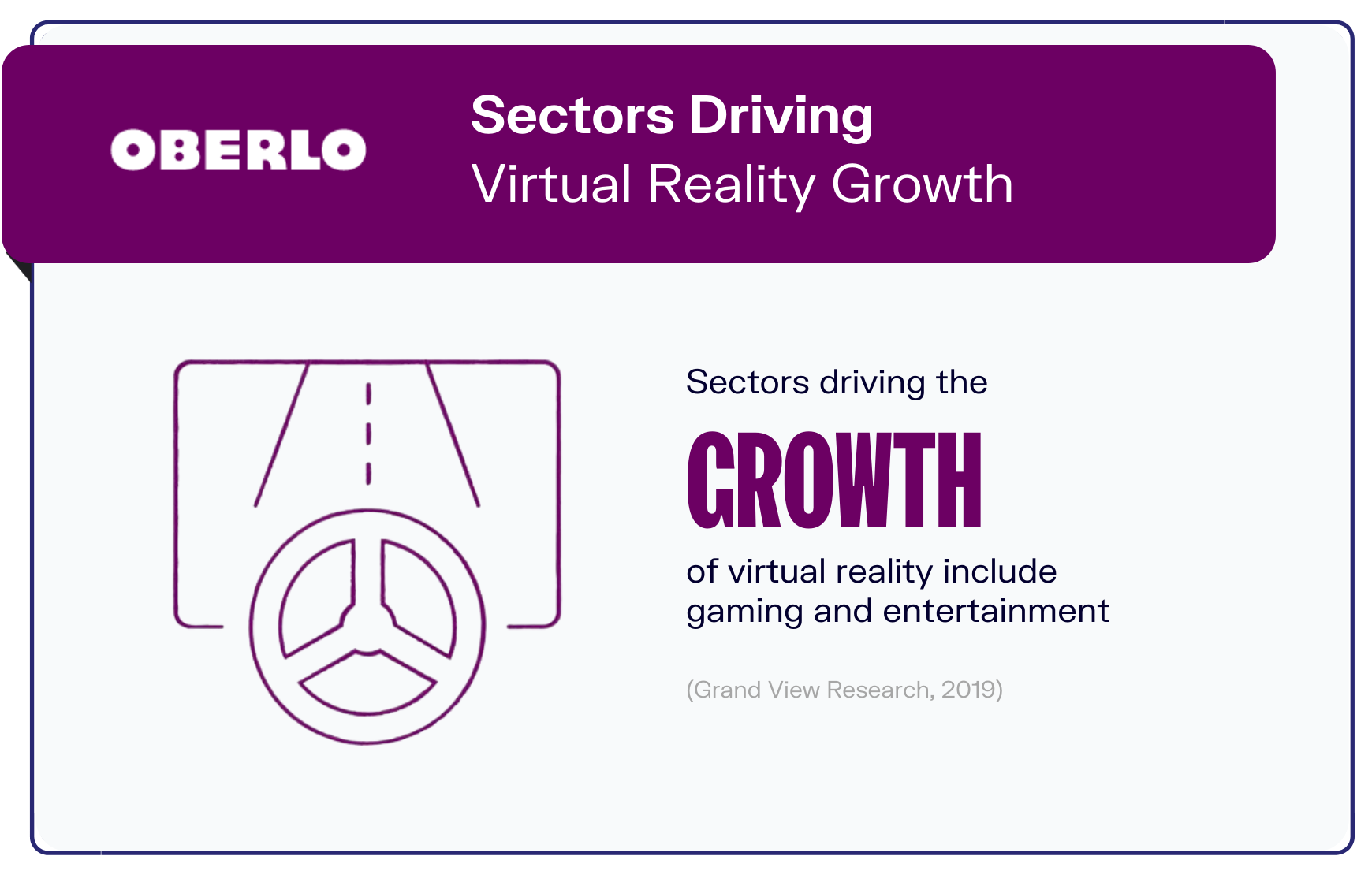 This then begs the question: What are some of the key drivers behind such impressive growth?

Sectors that have seen widespread adoption of and increased demand for VR include gaming and entertainment (Grand View Research, 2019).

With not much other than a headset needed to play a VR game, it makes it easy and convenient for gamers to just pop the device on, launch, and be taken to an entirely different world.

Entertainment companies have also been eager to implement the technology. These include the use of VR holograms in theme park rides at the London Thorpe Park as well as the launch of Mario Kart VR by a video game development company.

VR is also particularly popular in the education sector, which includes the use of it to train doctors and aircraft pilots. Because of the nature of such jobs and the high costs of mistakes, the simulation permitted by virtual reality makes it a practical solution as it allows them to practice in a safe environment. 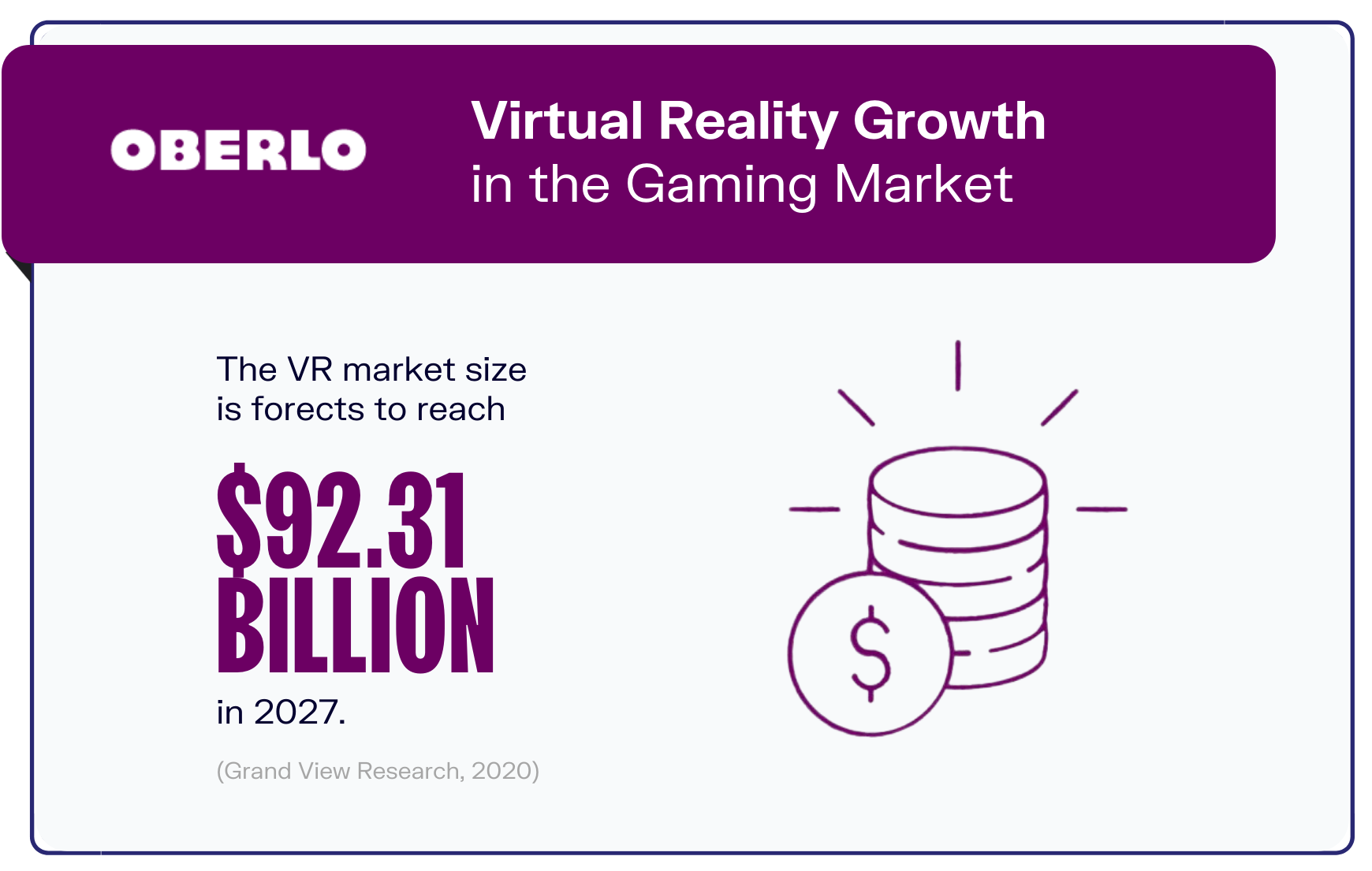 Given the advantages of VR in gaming, it should come as no surprise then that more and more gaming companies will be adopting the technology as demand for it grows.

In fact, the global virtual reality in the gaming market is forecast to grow rapidly over the next few years.

According to the latest virtual reality statistics, by 2027, its market size is forecast to reach $92.31 billion, which marks a compound annual growth rate of 30.2 percent in the seven-year period between 2020 and 2027 (Grand View Research, 2020).

The biggest driver of this is expected to come from millennials, whose demand for tech-advanced games will push game developers to rely more on VR to meet rising standards. 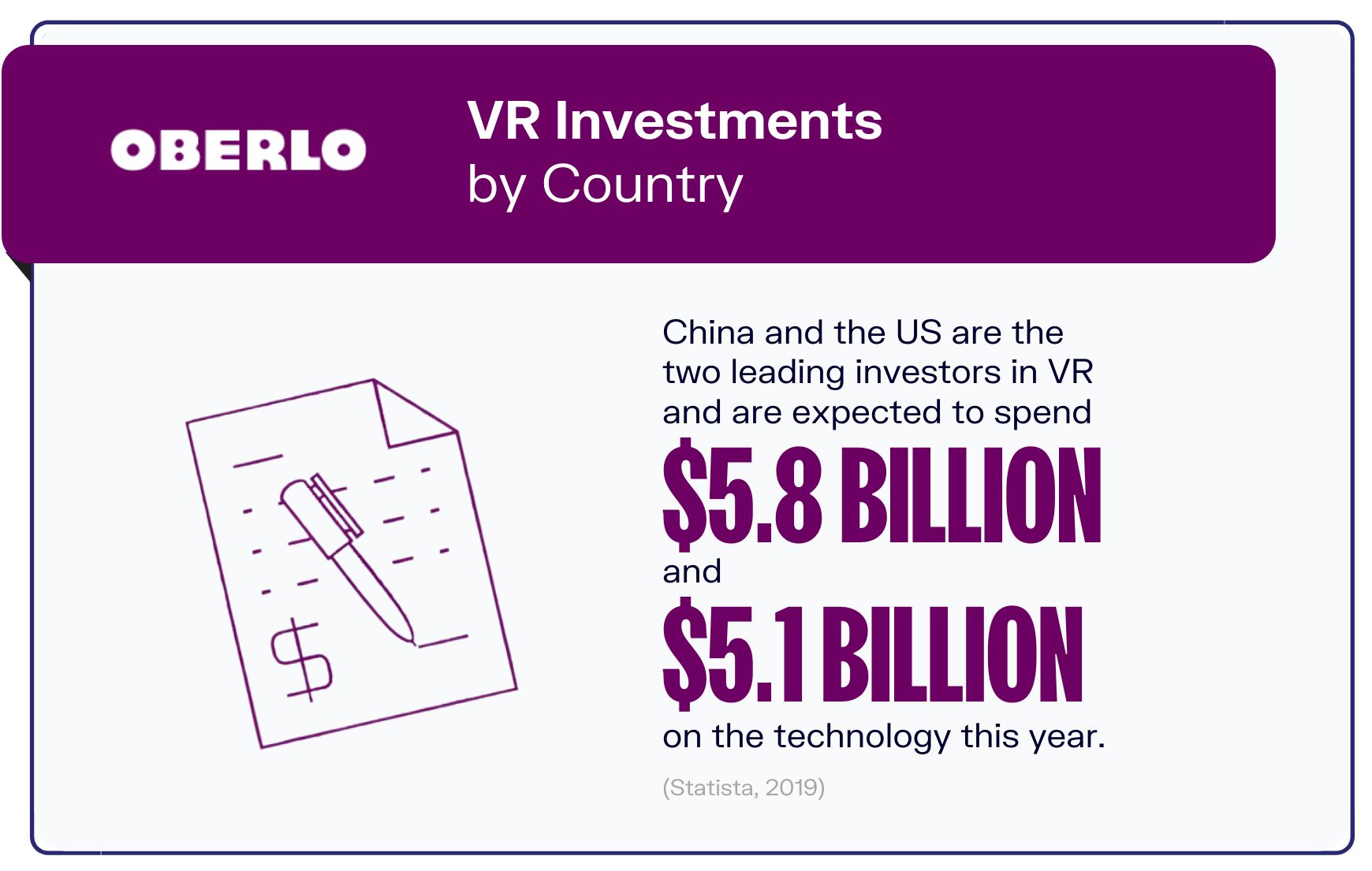 Though VR investments are expected from a multitude of countries worldwide, there are a select few that will be leading the pack.

Asian giant China is at the top of this list, with an expenditure forecast of $5.8 billion on the technology in 2020 (Statista, 2019). This is a significant amount. In fact, its spending projection makes up 30.8 percent of the total amount ($18.8 billion) that’s expected to be spent on VR globally.

The US is the second-largest investor and is forecast to spend $5.1 billion on virtual reality technology. Together, the US and China will be responsible for 58 percent of the global investment into VR.

This is followed by the entire Western Europe bloc with $3.3 billion and Japan with $1.8 billion. 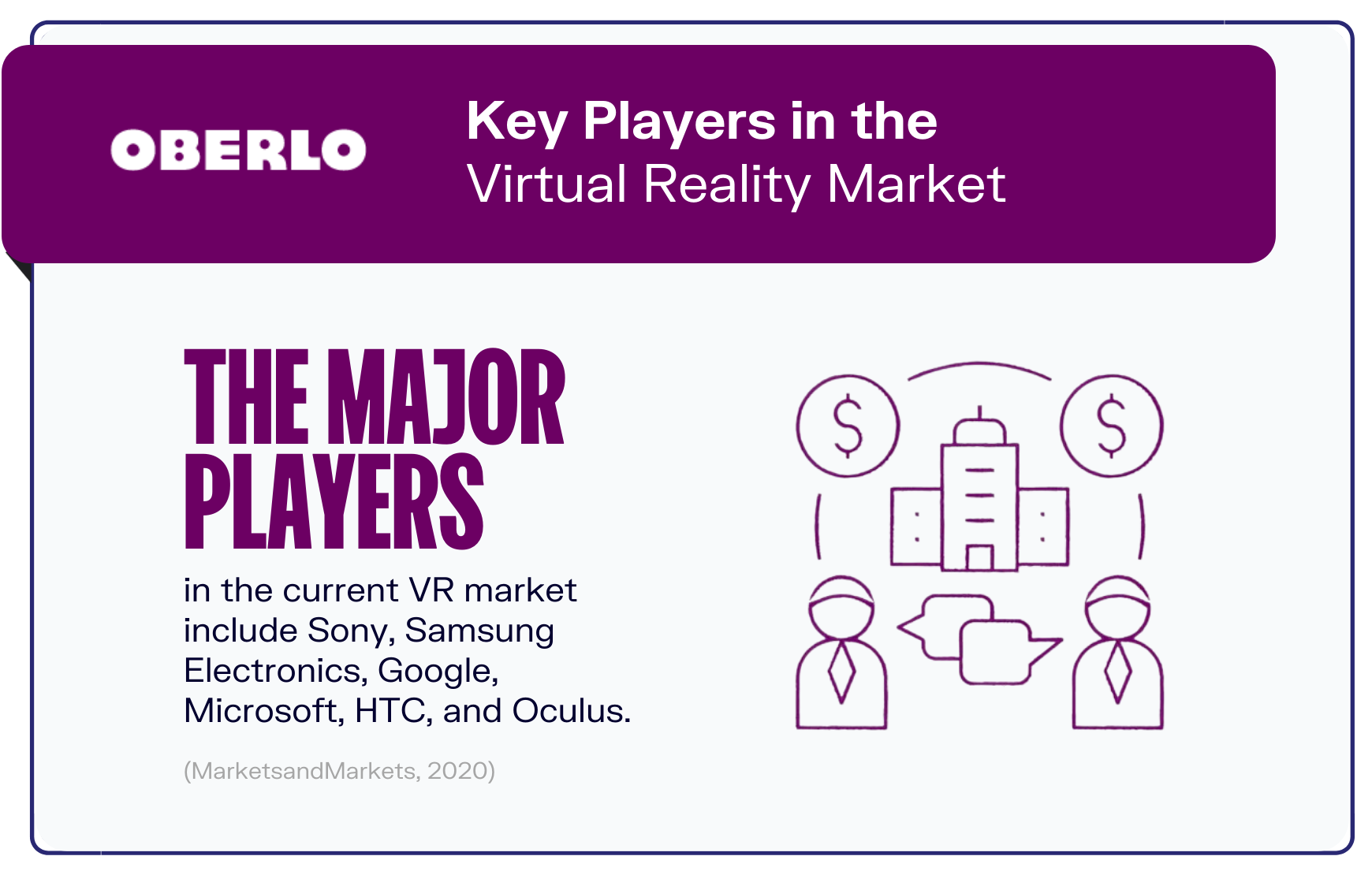 Because VR is still a relatively new technology, there are only a handful of major players in the current market.

A quick look at the best VR headsets in 2020 by different review sites shows that these brands dominate the list with their products.

However, you can expect big names to enter the playing field very soon. Leading tech company Apple, for example, already has a headset in the works, which they’re planning on launching sometime in 2022. And they’re not stopping at one. A smaller set of glasses is also expected to be up for sale the following year.

That’s it for the most important virtual reality statistics of 2022. We hope you now have a better idea of the direction this technology is headed towards and its potential.

Given its advancements over recent years, it’s probably safe to say that it’s only a matter of time before virtual reality takes over our lives.

Whether you’re looking to adopt the technology for your ecommerce store or be a leading seller of its devices, it’s always better to get a jump on it sooner rather than later so why not get

Here’s a summary of the Virtual Reality statistics you need to know in 2022:

Is there anything else you’d like to know about Virtual Reality statistics and wish was included in this article? Let us know in the comments below!

10 Mobile Usage Statistics You Should Know in 2023 [Infographic]