Today, I did the second-hardest thing I’ve ever had to do: I took away Mom’s cat.

Mom’s assisted living facility called last Thursday. “We strongly encourage you to consider moving your mother to memory care,” the director told me. “I know we talked about this a year ago, and at that time you and your family decided she wasn’t ready. We think she’s ready now. She’s refusing her meds. She’s refusing to eat. She’s wandering. She’s more confused than ever.”

I phoned my brother, Jeff, who has handled the bulk of Mom’s care since she moved to Happy Acres a decade ago. “What do you think?” I asked.

“I think they’re right,” he said. “Mom has been to the emergency room three times since the middle of November. She seems relatively lucid after each hospital visit, but that fades fast. Within a day of returning home, she’s out of it again. And her confusion does seem to be getting worse.”

“Yeah,” I said. “You’re right. Even when she’s lucid, she’s confused. Remember when she called me from the hospital two weeks ago? She was speaking in complete sentences for once, but the sentences made no sense. She was asking to see the sherriff. She was talking about her dog, but she hasn’t owned a dog since the 1980s.”

Then I added, “The tough part is that she can’t keep her cat if she moves to memory care. And she loves that cat.”

Mom moved into Happy Acres on the sixteenth anniversary of my father’s death, 21 July 2011. She was 63 years old.

She had been living alone at the family homestead — the home my grandparents owned when I was a boy — for all sixteen of those years after Dad died. But without us noticing, Mom began to slide into…well, the doctors cannot tell us what she was sliding into. But it was something like dementia.

That summer, we realized that she was having problems.

Her schizophrenia exploded. (She insisted the neighbors were firing guns at all hours. They didn’t own a gun. She reported conversations and events that never took place. And so on.)
She became unable to take her medication reliably. (She’d miss doses or, more often, take a day’s worth of doses at once. Sometimes two days.)
Plus, she was what the medical folks call “non verbal”. That is, she couldn’t communicate what she was thinking and feeling. (Except on those random rare occasions when she could carry on a nearly-normal conversation.)

The final straw came when Mom drove her car through the back of the garage. My brothers and I knew then that something had to be done. And when the doctors told us they couldn’t explain what was wrong, we made the difficult decision: We found a memory care facility with an open spot and moved her in.

Mom didn’t like the memory care unit at Happy Acres. She shared her apartment with another resident. Mom wanted privacy. She didn’t like the social activities. She wanted to sit alone in her room and watch the Home Shopping Network. She wanted her cats. (She had two cats when she was living on the family homestead.)

Within a few months, the staff at Happy Acres recommended that we move her upstairs to a private apartment outside the memory care space. That’s where she’s lived for the past ten years. She’s had two large rooms to herself. She spends most of her time watching the Home Shopping Network (still), but for a long time she seemed to enjoy going downstairs at mealtimes, sitting in the same chair at the same table with the same people.

Mom missed her cats, though, so before Kim and I left for our year-long RV trip in 2015, I drove her to the Humane Society. There, she chose a cat. (And the cat chose her.) For seven years, sweet little Bonnie has been Mom’s closest companion. She loves that beast, and the beast loves her. 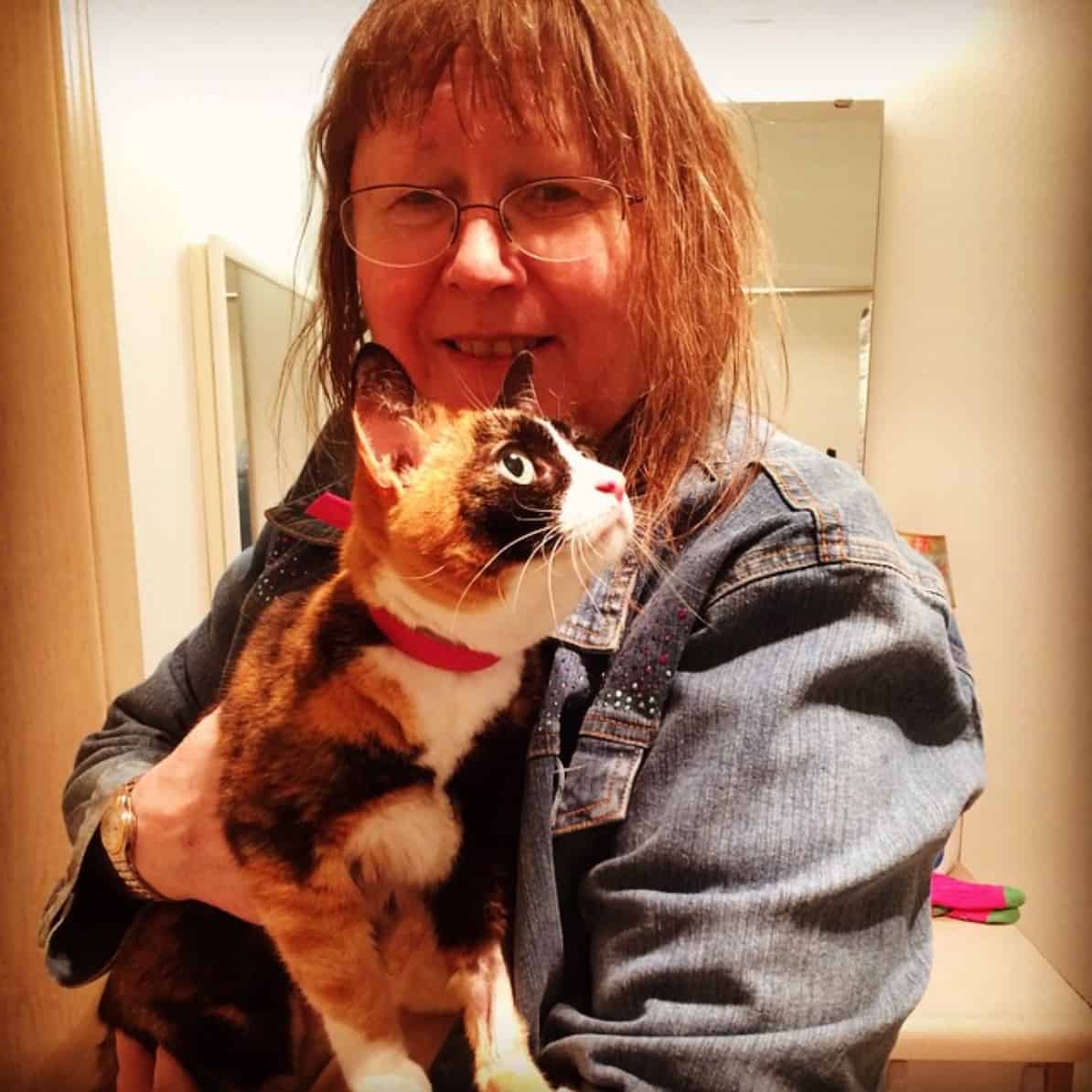 Over the past year, however, Mom’s health has declined — and so has Bonnie’s. Bonnie was never a robust animal to begin with, and dental problems have made it painful for her to eat. As a result, she’s lost a lot of weight. Meanwhile, Mom’s had issues of her own.

Mostly, her health has been stable at Happy Acres (aside from her ongoing confusion and a continued “non-verbal” state). Recently, though, she began to have digestive issues. These issues led to her having three visits to the emergency room at the end of the year. For the past two months, Jeff and I have spent a lot of time and energy trying to figure out the best course of action for Mom.

Last week, when Happy Acres called to recommend moving Mom to memory care, we agreed it was time. A fourth trip to the E.R. for her over the weekend simply reinforced that decision. Then, when Jeff visited Mom earlier this week, he messaged me: “It feels like she’s just waiting around to die. She’s not eating. She’s not taking her meds. She’s not putting on clothes.”

Logically, we think this is the best move. Emotionally, however, it’s tough.

Today, I drove up to sign the paperwork. I did everything I could to procrastinate, though, which is a sure sign that I didn’t want to do it. I took the longest route possible, winding along Oregon country roads. I stopped for half an hour at a bookstore (where I didn’t buy anything). I stopped to eat lunch. Eventually, though, I could delay no longer.

At Happy Acres, the woman in charge showed me Mom’s new room. It’s tiny. It’s the size of a college dorm room. Plus, it’s sterile. We went upstairs to look at Mom’s furnishings, and I was overwhelmed. Her current space is at least four times the size of the new space, and she doesn’t have to share it with anyone. Mom may not be able to communicate, may not be able to tell us what she’s thinking and feeling, but she’s surrounded by photos and furniture that remind her of the life she’s led. She’s going to lose a lot of that when she moves.

“Oh,” she said. I couldn’t tell whether she understood or not.

“The room is smaller,” I said, “so you won’t be able to take all of your stuff with you. Are there things you want to be sure go with you?”

“Are there things that you want to take with you to the memory care facility?”

“And I’ll have to take Bonnie with me today,” I said.

“You will?” she said. She seemed to understand. But maybe not. In any case, it broke my heart. Bonnie, who had been winding around my ankles, jumped onto Mom’s lap.

“Hi, Bonnie,” she said and she smiled. She rarely smiles anymore.

While the gal from Happy Acres photocopied the contract that I’d just signed, I gathered up all of the cat stuff. Mom petted the cat. I can’t be certain, but it looked to me as if her eyes were watering. She wasn’t crying but she seemed near to.

“Yes,” she said, and I died inside. How could I do this to her? How could I take the one thing that brings her daily joy? I felt dirty. And mean. Why didn’t I simply have Mom move in with me and Kim? In other cultures, that would be the expectation, the norm. Not in ours. I felt callous and cruel.

Then a couple of things happened.

First, as I was searching for Bonnie’s food and toys and litter, I noticed the state of Mom’s apartment.

There was a bedpan on her nightstand. There were stains all over the floor from recent “accidents” where she hadn’t reached the bathroom in time. There were diapers in the closet.

I recalled the recent conversations we’ve had with the staff of Happy Acres about how difficult it is to get Mom to eat or to take her meds or to perform basic hygiene.

Yes, Mom could come live with me and Kim, but am I equipped to make her care my full-time job? Would I ever feel comfortable leaving the house to run errands while leaving her home alone?

Second, Mom said something that reminded me why she was at Happy Acres. As I was gathering gear, she asked me a question: “Are you moving in here too?”

I realized that, in that moment, she didn’t know who I was. She didn’t recognize me. While I suspect this has happened in the past, this is the first time I’ve known for sure that she thought I was a stranger.

“No, I’m not moving in,” I said. “I’m getting things ready so that you can move somewhere they can better take care of you.”

I stayed for a while longer so that Mom could pet her cat. Then I hugged her good-bye, said “I love you”, and drove home to Corvallis.

I still don’t know whether this is the “right” thing to do. It feels wrong. But it also feels like the only option. And, as Jeff pointed out during my drive home, if we decide this is the wrong choice for Mom, it’s not irreversible. We can always move her back into the main living area at Happy Acres. Or there are other facilities in the area that might work for her.

I realize it’s a lot to expect, but I have high hopes that one day Mom can be reunited with Bonnie.

Update: To ease her transition, I slept downstairs in the guest room with Bonnie last night. Doing so added to my torment. Bonnie is sweet, and twice during the night she woke me to pet her. All I could think is that for the past seven years, she’s woke Mom to pet her, not me. Last night, Mom didn’t have a cat to cuddle. What was that like for her?