Which Shopify Plan Is Best for Me? Each plan provides different features, and it can be challenging to work out what you need and what you don’t. Plus, if you want to choose the cheapest plan, you need to look beyond the price tag and calculate how the different transaction rates will affect your bottom line.

But that’s not all.

When considering the cost of Shopify, you also need to take into account extra costs and variables, such as Shopify Apps, Shopify’s point-of-sale (POS) system, and Shopify Payments.

How much is Shopify?

How much does Shopify cost per month? In essence, there are five Shopify pricing plans to choose from:

Shopify Starter. $5/month, plus 5% and 30¢ per transaction. This Shopify plan allows you to create a simple store and easily share products across social media platforms.

Shopify Basic. $29/month, plus 2.9% and 30¢ per transaction. Shopify’s Basic plan is the platform’s entry-level plan and gives you an ecommerce website and core features.

Shopify. $79/month, plus 2.6% and 30¢ per transaction. This is Shopify’s main offering, which provides a few extra features than the Shopify Basic plan—we’ll refer to this plan as “Shopify (regular)” throughout the rest of this article.

Shopify Advanced. $299/month, plus 2.4% and 30¢ per transaction. This Shopify pricing plan is much the same as the Shopify Basic plan, with a few additional key features.

Shopify Plus. Starting at $2,000/month, plus transaction fees. This is Shopify’s enterprise ecommerce solution. Shopify Plus pricing differs depending on your needs.

It’s also worth mentioning that Shopify offers a free trial to help you discover which features and fees make sense for your business.

Plus, Shopify recently announced a deal that allows customers worldwide to access the Shopify Basic plan for only $1. For three months, every merchant pays only $1, then regular pricing applies.

Which Shopify plan is best for me?

When considering which plan is best for you, a good place to start is with the features list shown on Shopify’s pricing page.

You may be wondering why Shopify Starter and Shopify Plus haven’t been included in the table. In short, these two plans have very specific use cases and aren’t like the other three plans.

If you look closely, you’ll notice that there are only a few key differences between each of the three main Shopify plans.

In the image below, we’ve highlighted the four main differences between Shopify pricing plans:

Aside from reporting tools, there are also a few slight differences in the number of staff accounts, shipping discounts, and inventory locations available.

It’s absolutely worth weighing up each of the different features available on each plan. However, if you want to choose the cheapest Shopify plan for your business, you need to pay the most attention to Shopify’s transaction fees.

Shopify Starter pricing: $5/month, plus 5% and 30¢ per transaction.

Shopify Starter isn’t like the three main Shopify plans, as it doesn’t provide an ecommerce website. Instead, it offers only the core sales functionality of Shopify, such as the ability to take payments and manage inventory.

Shopify Starter is a good choice for anyone who doesn’t need a full-fledged ecommerce website but wants to start selling.

For example, you can use Shopify Starter to create a simple online store and sell via social and messaging apps, such as a Facebook Shop or Messenger.

The plan also lets you share your products through SMS, email, and any place else you can think of.

The Shopify Basic plan is the platform’s entry-level offering. When considering Shopify Starter versus Basic, the most significant difference is that Shopify Basic provides a fully fledged ecommerce website.

Now, if you want an ecommerce website, should you go with the Shopify Basic plan or upgrade to Shopify (regular) or Shopify Advanced?

Do you need two or fewer staff accounts?
Are four inventory locations enough?
Can you go without professional and advanced reporting?
Can you get by without showing actual calculated shipping rates at the checkout?
Are you looking to sell in only one country for now?

If you answered yes to all of these questions, Shopify Basic is for you!

Shopify (regular) offers a few additional features over the Shopify Basic plan. Here are some questions to help you determine if this plan is right for you:

Do you need three to five staff accounts?
Do you need five inventory locations?
Is professional reporting sufficient (i.e., can you go without advanced reporting)?
Can you get by without showing real calculated shipping rates at the checkout?
Do you want to sell internationally?
Do you plan to sell products for the same prices when selling internationally?

If you answered yes to all of these questions, sign up for Shopify (regular)!

At this stage, the 0.2% transaction fee difference makes it cost-effective to upgrade to Shopify Advanced.

Let’s consider the main differences in features between the regular Shopify plan and Shopify Advanced. Do you need:

Six to 15 staff accounts?
Up to eight inventory locations?
Access to advanced reporting features?
To show real calculated shipping rates at the checkout?
To sell products for different prices when selling internationally?

If this sounds about right, the Shopify Advanced plan may be the best solution for your business.

Shopify Plus pricing: Starting at $2,000/month, plus transaction fees.

Shopify Plus is the platform’s enterprise solution, and starts at $2,000 per month. Shopify Plus states that “for more complex, higher-volume business structures, our variable fee option flexes with your requirements.”

To find out more about your particular pricing requirements, you’ll need to talk to a Shopify Plus expert.

Shopify Plus merchants gain access to additional benefits, such as lower transaction fees, a dedicated launch engineer, and the ability to customize critical aspects of your website, such as the checkout experience.

What’s more, if you choose Shopify Plus, there’s plenty of extra features available, such as:

Shopify Launchpad, Shopify’s automation tool for running promotions and sales.
Shopify Flow, Shopify’s back end automation platform, which allows you to set up and manage custom workflows to automate repetitive tasks.
Shopify Plus Wholesale, which allows you to create a wholesale storefront that’s an extension of your existing store. This way, you can manage your retail, business-to-consumer (B2C), and business-to-business (B2B) sales from one integrated dashboard.
Omnichannel commerce capabilities that enable you to manage unique customer relationships across many touchpoints online.
The ability to create and optimize multiple international online stores. 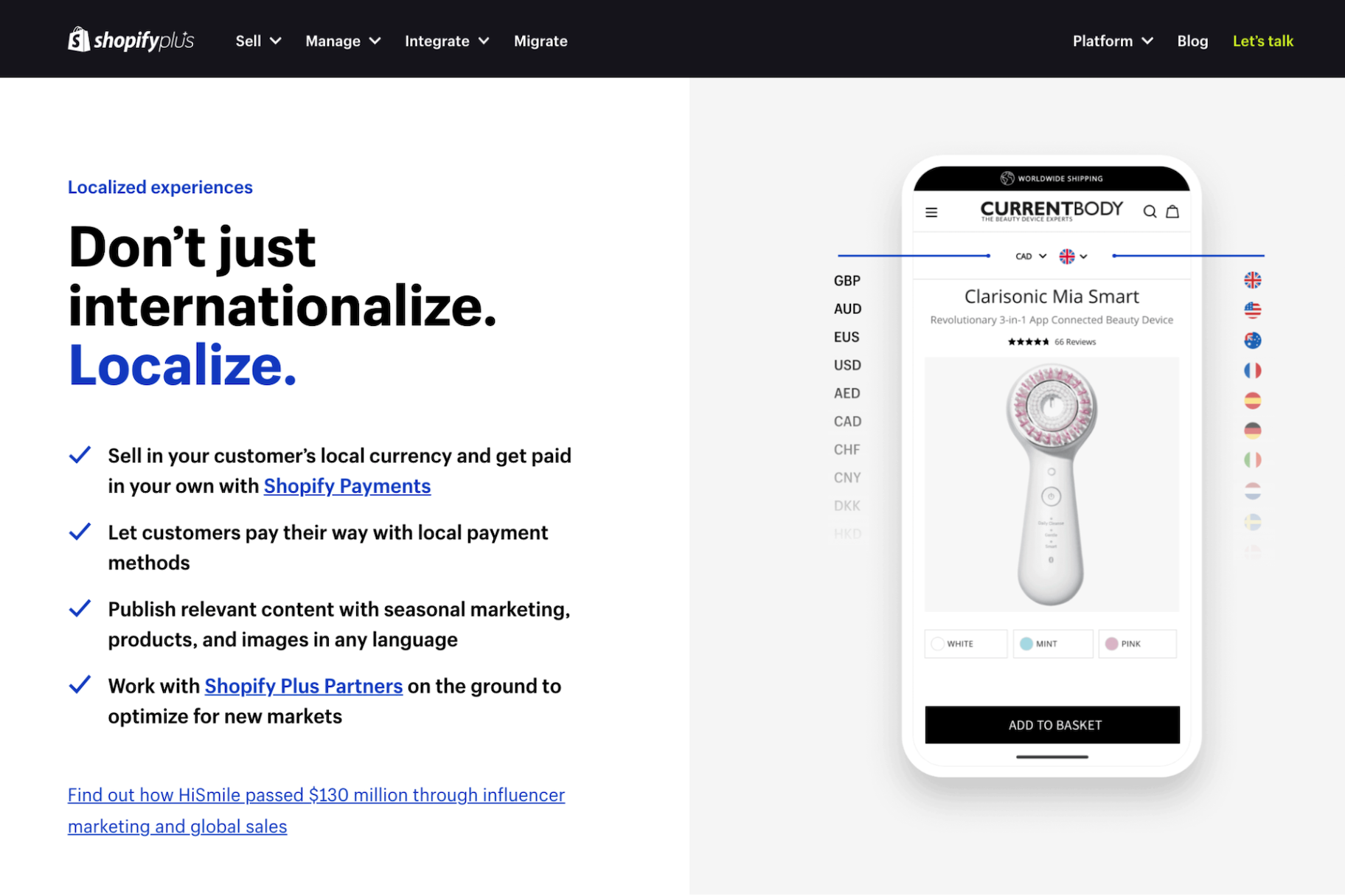 Next, let’s explore some other important Shopify pricing considerations.

There are two ways to process payments through Shopify—you can use a third-party provider or Shopify Payments.

Here’s the deal: If you don’t use Shopify Payments, you’ll be charged an additional transaction fee for using a third-party payment provider. These transaction fees are:

For this reason, it makes financial sense to use Shopify Payments. 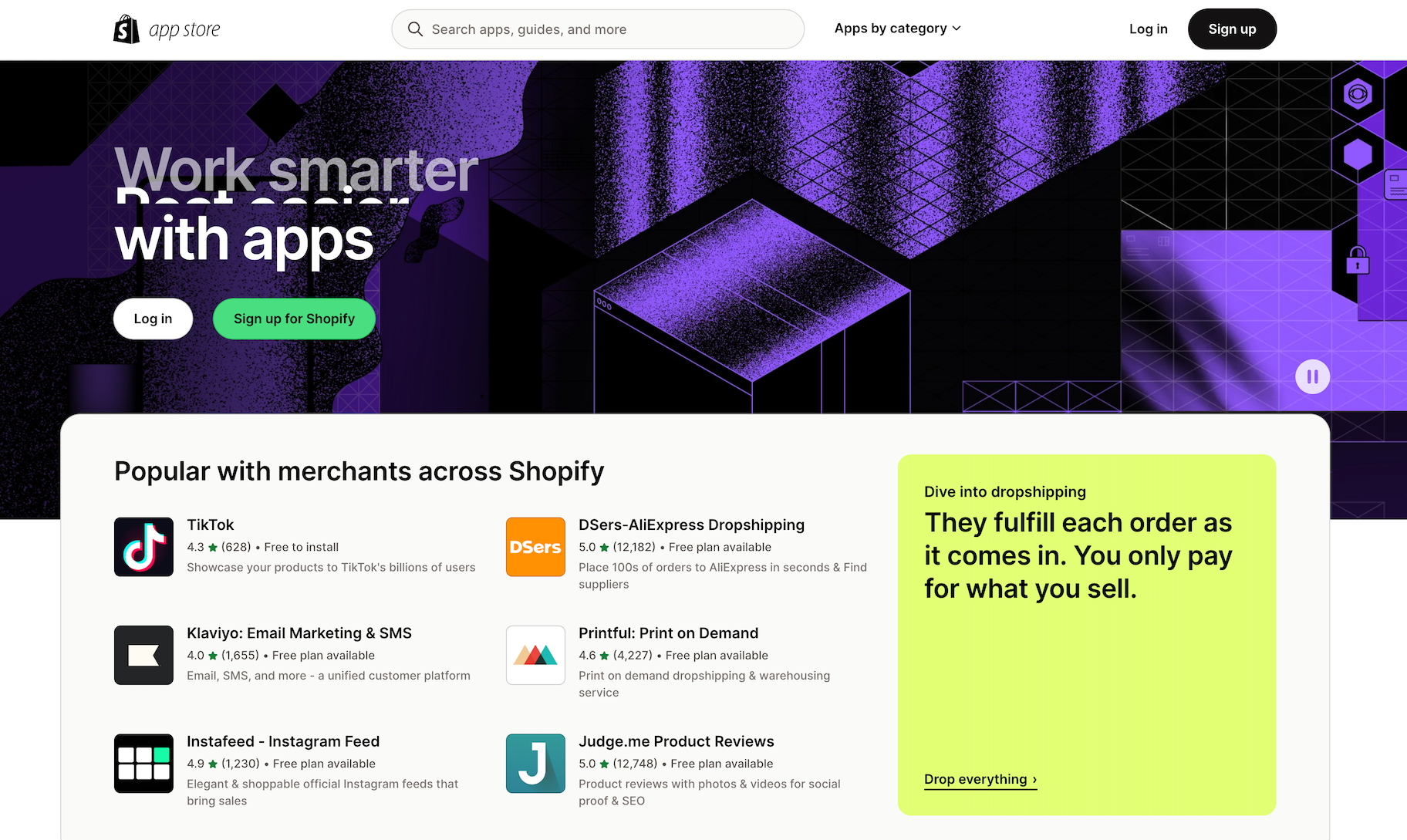 The Shopify App Store is home to more than 6,000 apps that can help you extend and customize your website’s functionality.

For example, Automizely enables you to select and sell dropshipped products on your store. There are also many apps that can help you to:

It’s important to remember that Shopify’s pricing plans don’t cover the costs of these third-party applications—and you’ll likely want to use at least a handful of them.

So, how much do Shopify apps cost? It depends on the app, but most charge a monthly recurring fee.

It’s not uncommon for a Shopify store to spend hundreds of dollars each month on apps. So, it’s worth taking into account these fees when considering the cost of Shopify.

All Shopify plans (not including Shopify Starter) come with fairly comprehensive POS features.

However, you may want to consider adding Shopify POS Pro to your plan if you have a physical storefront and want to take payments in-person.

Pricing for Shopify POS Pro is $89/month per location. 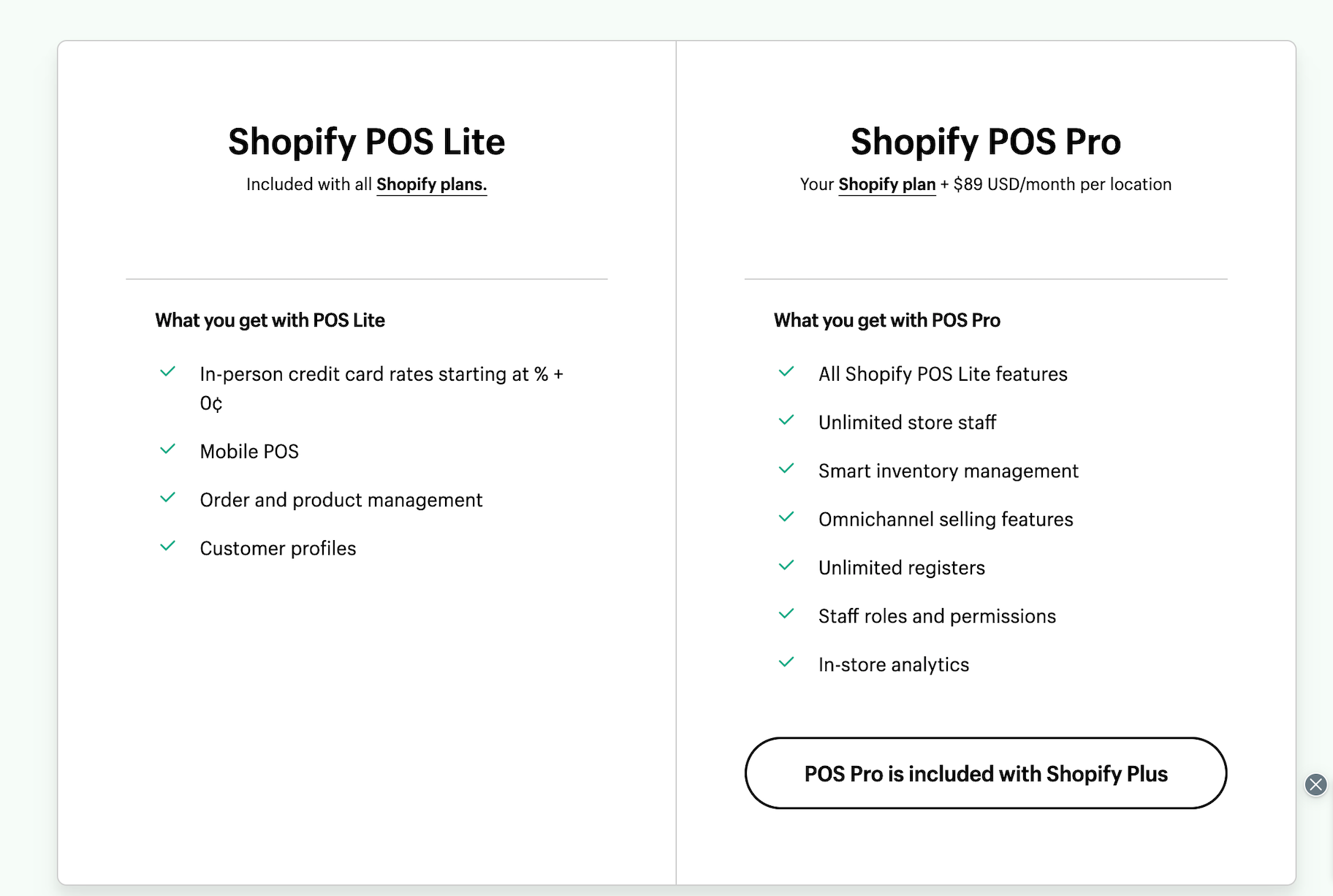 When you sign up for Shopify, you’ll get a free www.storename.myshopify.com domain. However, you’ll probably want to upgrade to a custom domain name.

To do this, you can purchase a domain from a third party like GoDaddy or NameCheap, or secure a domain name with Shopify Domains from $11 per year.

Shopify Email pricing: Send 10,000 emails per month for free and then pay $1 for every 1,000 additional emails.

Email marketing is an essential aspect of ecommerce sales, so it’s worth noting that Shopify offers an email service.

Users can opt to use Shopify Email instead of a third-party service like MailChimp or Active Campaign.

Shopify Email allows you to send up to 10,000 manual or automated emails per month for free. After that, you’ll pay $1 for every additional 1,000 emails—which works out to be one-tenth of a cent per email.

You can benefit from considerable Shopify discounts when you opt for Shopify’s annual plan and pay for your subscription annually or biennially.

These annual pricing discounts aren’t promoted on Shopify’s pricing page. However, you can save:

Final thoughts: Which Shopify plan is best for me?

Choosing a Shopify plan doesn’t have to be complicated or time-consuming. Here’s a quick roadmap to help you figure out which Shopify pricing plan is best for you:

Start by evaluating the features available on each Shopify pricing plan. The best plan for you may be obvious based on the features you need.
Take into account Shopify’s transaction fees. If you bring in less than $16,333 per month, Shopify Basic is the most economical choice—over that amount, it makes sense to consider Shopify (regular).
Consider additional Shopify costs, such as app subscriptions, domain fees, and Shopify Email fees.
Remember, you can avoid additional transaction fees by using Shopify Payments. Plus, you can save 10% with Shopify’s annual plan.

Finally, don’t fret too much about choosing the perfect Shopify subscription for you—you can always change your subscription plan in the future.

Sign up for Shopify’s free trial to explore further.

2082: The 5 ETSY Niche Selection Mistakes That Will KILL Your Shop (Before You Ever Start)

6 Crucial Ones for Ecommerce

Dropshipping Vs Affiliate Marketing: Which is More Profitable? how to promote clickbank products 2021|clickbank tutorial in…

Lockdown Earning Ideas From Home | How To Make Money Online…

Affiliate Marketing on Quora in 2023: The Ultimate Guide